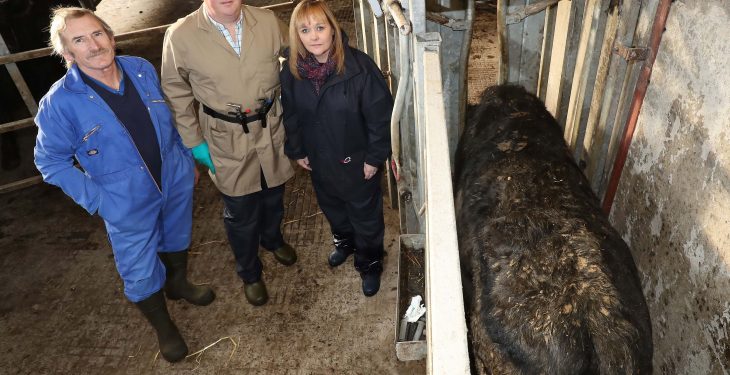 TB rates in the North have hit their worst in more than a decade, according to the latest DAERA figures, but it’s not entirely down to the disease’s spread, the region’s most senior vet has said.

Chief veterinary officer Robert Huey said the disease is at an “unacceptable level”, but added that better surveillance has meant more incidences of TB had been detected compared to previous years.

He said: “There has been a gradual increase [in TB incidences] since 2004 but this last year we have seen a dramatic increase that’s causing us all a lot of concern.

“Over the last year to year and a half, we have introduced a number of measures to increase the sensitivity of testing.

The whole secret to getting on top of this disease is very simple – it’s the same as any disease; you fight it early on and you get it out of the system as quickly as you can.

As part of the new measures, the Department of Agriculture introduced a new contract for practitioners, increased its level of severe interpretation, enhanced postmortem inspections in the meat plants and increased the amount of Gamma testing that was used.

It also formalised its agreement with vets which now includes performance indicators such as for how quickly and accurately results are recorded and as well as how the tests are administered.

Huey added: “Those things together would have increased the number of reactors and played some part into the rise that we are seeing – and that, in a way, is a good thing.

The question always is, how much of the rise is due to your change of measure and how much is due to an increase in disease – I don’t know.

“But I am also convinced there is an increase in the amount of diseases out there as well and the figures and the data would tend to indicate that some of the figures we are seeing are due, in part, to increased surveillance.”

The changes were made as part of recommendations highlighted in the TB Strategic Partnership Group (TBSPG) report.

The TBSPG is an independent advisory group which has been tasked by the Minister of Agriculture with developing a strategy and implementation action plan to bring about a progressive and sustained reduction of TB, with a view to eventual eradication.

As part of the department’s TB taskforce recommendations it will also operate two 100km² zones where badger numbers will be controlled to monitor the level of TB passed through wildlife.

The areas will be surrounded by a TB vaccination area so that the disease is not brought back inside the zones.