There was a varied selection of zero-grazing machines on display at the recent 2017 FTMTA Farm Machinery Show in Co. Kildare.

Grass Tech was one of the exhibitors showing its wares, which included the twin-axle GT120 model.

Jim Barron, Managing Director of Grass Tech said, “Sales of our zero-grazing machines have doubled year-on-year. The GT120 model has been around for four years. We’ve been making machines of this type for almost seven years.

The GT120 is designed as a “robust, but easy-to-use machine that can be operated with lower-powered tractors typically found on livestock farms”.

According to Barron, the machine’s weight is evenly spread to reduce soil damage and compaction. Another important feature, he says, is that all the hydraulics are powered using the tractor’s own hydraulic system.

By not having a self-contained pump and oil tank, this saves some weight, which instead has allowed Grass Tech to “use thicker steel throughout the machine and add strength to areas such as the bogey and pivot pins and use heavier-duty bushes for greater reliability”.

Grass Tech Grazers, as they are called, are fitted with Galfre twin-drum mowers. These are carried on 60mm pivoting pins with spring suspension. Mower beds are also fitted with Hardox pans. Drum speed is 1,575rpm and cutting height can be adjusted down to 35mm.

From the mower unit, the grass is lifted by an elevator. It rotates at just 70rpm. According to Barron, this “avoids damaging young grass, to ensure maximum nutritional value is maintained”. 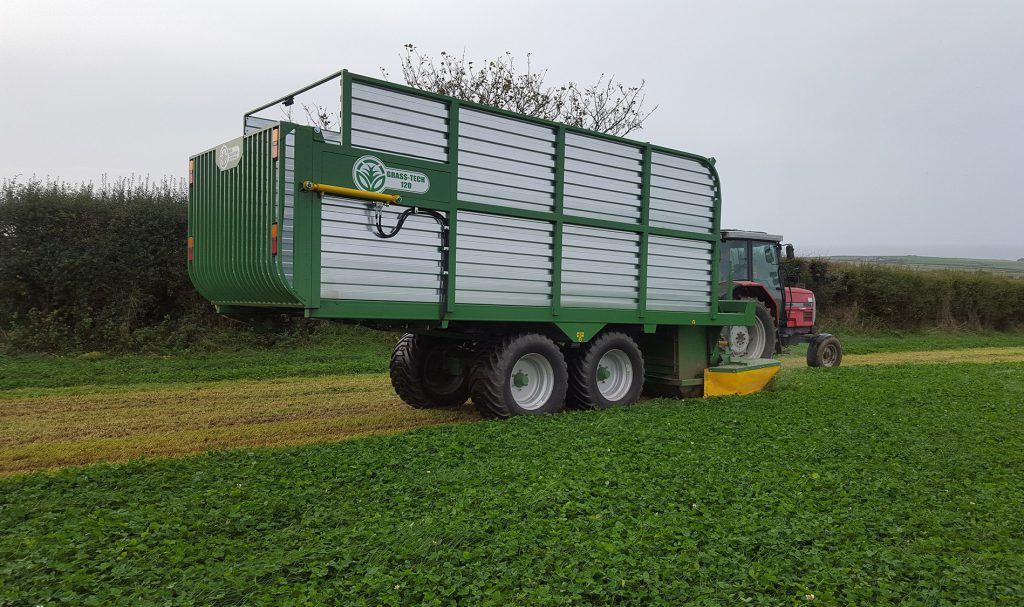 The grass is then deposited into a double-lined body, which is carried on a frame. The hydraulics are operated using a simple cable control, which requires only a single set of flow and return valves. The rear door incorporates a full-load sensor and a rear-view camera with night vision.

Asked if Grass Tech would consider offering a disc rather than a drum mower, as some companies are doing, Barron said, “The drum mower is the best system for this type of application. It can take the beating.”

According to Barron, Grass Tech is the market leader in the ‘grazer’ business here in Ireland. He says that there is “sustained and growing interest” in such machines.