Pic: Farmer fined for towing trailer on 3 wheels with a full load of sheep on board

A driver in Co. Wicklow was fined for towing a trailer on three wheels over the weekend, which was carrying a total of 30 ewes on board.

The driver was ‘left sheepish’ as the Gardai declared the “wool wouldn’t be pulled over their eyes”.

The trailer was moved into a nearby field and a fine was issued to the driver, according to the Gardai.

‘Driver left sheepish’ Wicklow Gardaí stop driver towing trailer on 3 wheels with 30 ewes on board. You won’t pull the wool over our eyes! pic.twitter.com/LToLzHKgO1

All trailers must meet with Irish Road Traffic Regulations when in use in a public place, according to the Road Safety Authority (RSA).

These regulations set out the law in relation to weights, lights, brakes, plating, under-run side-guards and the securing of loads, it said.

Before towing a trailer the RSA recommends that drivers check their licence, as the type of trailer a driver is allowed tow depends on their licence type.

The RSA also suggests that farmers and those towing trailers must ensure that they are aware of the towing capacity of their vehicles and that trailers are in safe working order.

Meanwhile, Gardai in the Tipperary Traffic Corp seized a tractor which was driving on three wheels last week, with the fourth tyre tied to the back of a service trailer it was towing.

Photos of the seized tractor were posted by the Gardai on the Garda Traffic Twitter page. 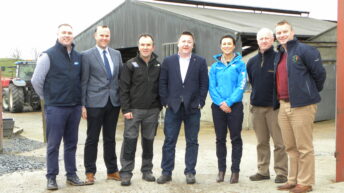