Storm Ali hit maize growers hard in the north-east of the country yesterday (Wednesday, September 19), with up to 100% of fields lodged.

The stormy weather conditions battered maize fields in the counties of Meath, Louth and Dublin, according to one farmer who spoke to AgriLand about the grim situation.

The farmer said that – in north-eastern counties – maize crops have taken an “absolute bashing”.

According to the unnamed farmer, the strong winds wreaked havoc between 9:30am and 11:30am yesterday morning.

Commenting on the damage, he said: “We probably have 60ac of maize that should have been harvested [on] Monday and Tuesday. We were put off by rain, thinking there was rain coming, and there’s probably two or three fields where 99% of the maize is lodged.

“All the farmers depending on this maize, all my feed customers, have literally no feed and it’s me that’s carrying the risk.”

It was noted that the damage was not as bad everywhere, with some varieties withstanding the gales better than others; but farmers still took hefty hits.

The financial disaster – I don’t know how we’ll handle that; how we’ll get them crops off the ground.

“I’m looking at one block of land now; there’s probably 27ac in it. One half is not too bad – the bottom where it was sheltered – but the top of the hill is battered; it’s actually sowed into the ground.”

Estimating damage will depend on crop variety, wind angle and other factors, he said.

However, he noted that the contractor went in straight away and started cutting maize to try and salvage some of the crop.

Highlighting the difficulties faced in doing so, he said: “Basically, what has never happened is [that] the salvage has started straight away – at 2:00pm.”

The farmer said that many questions have arisen from the damage, such as if assistance from the Department of Agriculture will be introduced to help stricken farmers. 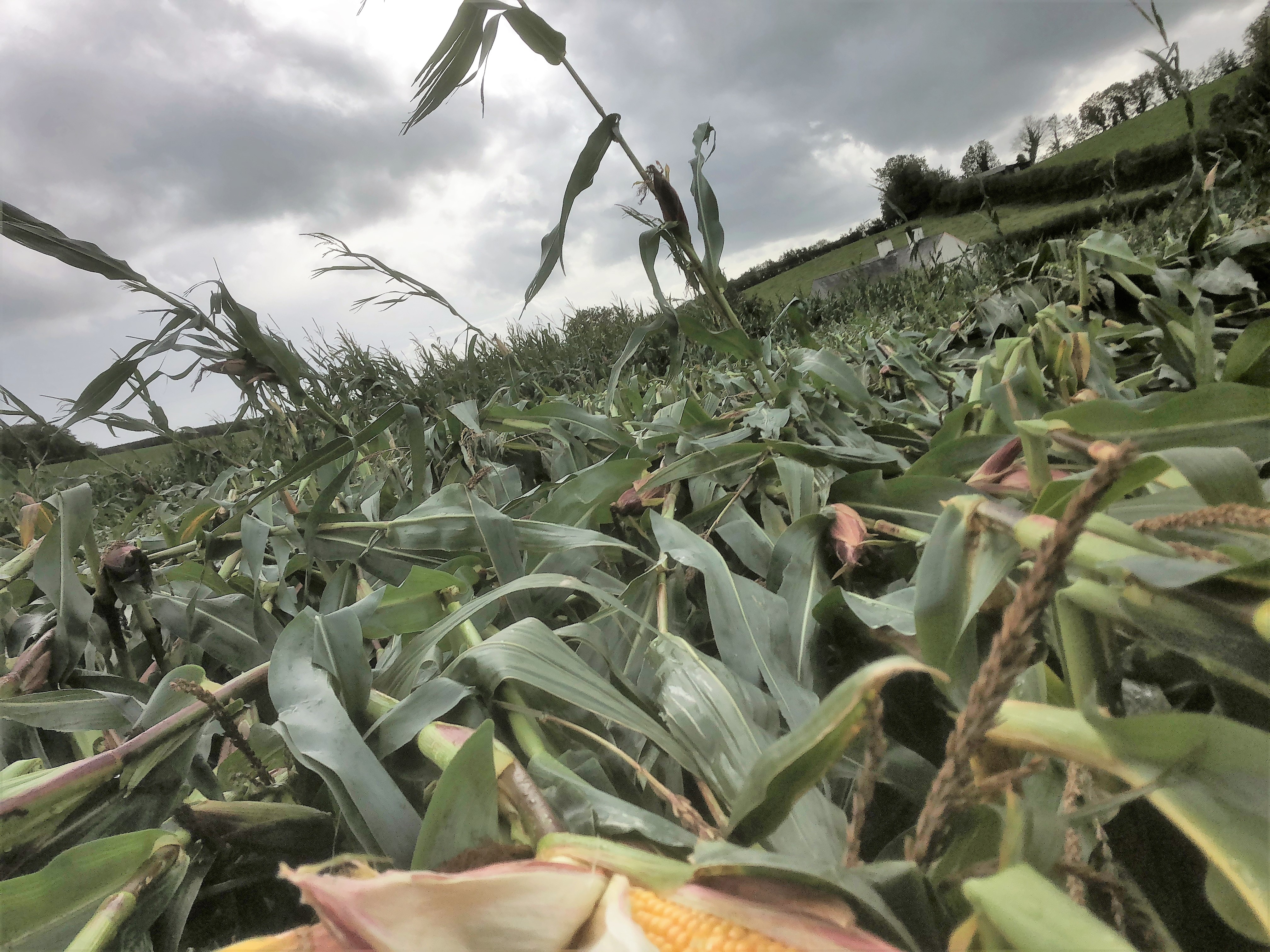 He added that there are numerous farmers relying on the maize for feed – some 50% and others up to 70% reliant on the crop – which will all exasperate the current fodder shortages.

Commenting on the area he was aware of that was most heavily impacted, the farmer said: “I don’t know if it’s a trend across the country, but I know fellows up in Dublin, Meath and it’s horrendous from Ardee to Dundalk.

Have we taken the brunt of it? There’s fields and you’d think a tornado went through them. This was way worse than the storm we had last year; Storm Ophelia was nothing compared to this.

“Wexford farmers might know the best way to combat this; how do you combat it? We’re facing something that’s never happened ever in the history of this county.

“We could cope with the drought, but it’s unbelievable what hit here; there’s unbelievable damage. Farming is a low-return business and we have fields that are completely devastated.”