The total spring lamb kill in 2015 is running 70,649 ahead of 2014 levels, figures from the Department of  Agriculture show.

To October 18, there has been a throughput of 2.07m sheep in Department of Agriculture approved sheepmeat plants, which is unchanged from the same period in 2014.

According to these figures, there has been a 6% increase in the cumulative number of spring lamb slaughterings to October 18.

However, despite the increase, the number of lambs coming forward on a week-to-week basis have dropped by 2,300 on the same week in 2014, there has also been a drop of 1,818 spring lambs from the week ending October 11.

These figures also show that there has been a 93% drop in the number of lambs/hoggets (2014 born lambs) being slaughtered, with 1,426 fewer of these animals making it to the factory.

Light lamb throughput has also dropped. The cumulative kill is back by 57% or 1,338 while the week-on-week kill has dropped by 30 on the same period in 2014.

The trade for factory and butcher type lambs has slipped slightly on previous weeks, with these lots back by €1-3/head, according to the country’s mart managers.

However, despite this fall, the trade for store lambs remains very strong with plenty of demand from buyers around the ring.

The quality of breeding stock coming forward is beginning to decline as the breeding season swings into full stride and this was reflected in the prices, with the better quality sheep achieving top prices. 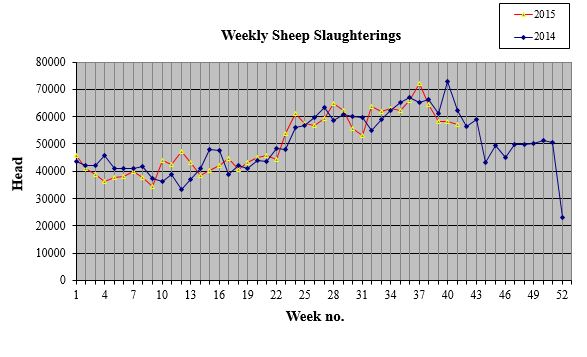 Sheep trade steadies on the back of reduced supplies