This report was launched by the Irish Spirits Association earlier today (Thursday, September 6).

The report “paints a promising picture for the industry” with strong export growth driving demand in the tillage and dairy sectors, the organisation said.

Irish cream liqueur is continuing its return to growth, with 5.6% growth last year. This confirms Irish cream as one of the EU’s top spirits exports, the association claims.

While consumption of alcohol falls at home, exports of Irish spirits are growing at an ever-increasing rate.

Sales of premium Irish whiskey grew by 40% in 2017 as more drinkers move up the value chain, making “more conscientious choices about what they drink”, the spirits industry group said.

Global demand for these products continues to power domestic production with the United States maintaining its position as Ireland’s number one export destination for spirits.

This is then followed by the UK, Canada, Germany and France, respectively.

Chairperson of the Oireachtas Committee on Agriculture, Food and Marine Pat Deering spoke at the launch of the progamme.

He said: “The Irish spirits industry is a star performer when it comes to Irish agri-food exports. 207 million bottles of Irish whiskey and Irish cream liqueur were sold globally last year, which is benefiting Irish barley growers and Irish milk producers.

I look forward to the continuing sustainable growth of the Irish spirits sector and to ever-increasing demand of Irish agriculture raw materials.

Patricia Callan, director of Alcohol Beverage Federation of Ireland (ABFI), said: “Irish spirits are now one of Ireland’s leading agri-food export categories; and one of the fastest growing categories.

“Irish whiskey and cream liqueur is now being sold in 140 markets worldwide and our industry is proud of our contribution to the Irish economy, to Irish agriculture and to achieving the Governments’ FoodWise 2025 exports targets.” 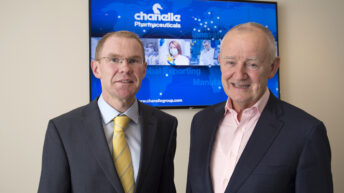