A farmer who has been patrolling the roads surrounding his farm with a shotgun to keep out dogs has received a warning from Gardai not to continue doing so.

The farmer – Andy “The Bull” McSharry, a sheep farmer from Gleniff, Co. Sligo – had taken to the roads “advising” dog walkers to keep their dogs under control, following a series of dog attacks on sheep surrounding his farm.

Also Read: Fed-up farmer: If the dog on my land is on a lead it’ll still be shot

The Sligo farmer spoke to Ocean FM in a follow-up interview on the matter after a chat with two Gardai earlier this week.

“We had a nice chat but they updated me on the licence I have,” McSharry said.

“The licence I have is for shooting vermin on my own land,” he explained, adding that he was “told nicely” by the guards that he can “no longer walk down the road with the gun in my hand or on my shoulder”.

“The only people who can do that are the people who are out shooting for sport reasons so if they’re shooting foxes or deer, that kind of thing; them type of people have the gun club licence and they can carry their guns on the road seemingly.

“A farmer’s type of gun licence seemingly cannot do that. You’re not supposed to be seen on the road or carrying the gun on the road.”

The farmer said that he would comply with the guards’ warning, adding: “The way I cooperate with the guards I’m taking their advice on board and we’ll go with that situation at this moment in time yeah.”

However, McSharry warned that, if “harassment” continues, he intends to close off his lands from hill walkers.

“I will have to take legal advice and go through the law but I’m fighting a campaign; I’ve a right to protest.

“I will stop the walks until somebody else tells me that I’m doing wrong. But I would definitely make that gesture and have a go at it. It’s coming down the track if people continue to try to intimidate me.

It’s not gone forever; until we sit down and sort out these problems it’s going to be used as a protest and I’m entitled to protest. And I’ll do that and at all times do my best to keep within the law.

McSharry reiterated his warning for dog owners to keep their pets away from his land.

“I’ve still authority to shoot dogs on my land and that’s what will happen if the dogs come back on my land.”

He added that he had been given a camcorder by some locals “because I’m getting in a situation now where I need to protect myself”.

“Anybody who’s in possession of or carrying a firearm must do without danger to the public safety or security of the peace; and that’s very important.

Really, at the end of the day, if you’re walking around on a road with a loaded firearm are you a danger to the public safety, security or the peace? I think you are.

“People should understand that these are very lethal weapons,” the former sergeant said. 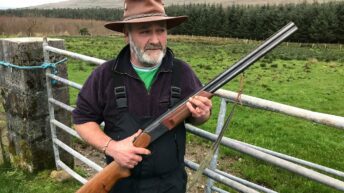 Fed-up farmer: If the dog on my land is on a lead it’ll still be shot