Factory quotes for lambs continue to edge upwards again this week, with many processors increasing their offerings by 5-10c/kg compared to last week.

As a result, farmers are encouraged to bargain hard when it comes to marketing their stock in an effort to secure higher prices in the coming weeks.

This week, Irish Country Meats (ICM) is currently offering a base price of 485c/kg + 10c/kg Quality Assurance (QA) bonus (payable up to 22.5kg carcass). This is an increase of 5c/kg compared to last week.

Kildare Chilling is currently offering a base price of 490c/kg + 10c/kg QA (payable up to 22kg carcass), unchanged from last week.

Likewise, Kepak Athleague is offering a base price of 490c/kg + 5c/kg QA (payable up to 22.5kg carcass). This is an increase of 10c/kg compared to last week.

For ewes, some factories are quoting 270c/kg excluding QA bonuses, while others have increased quotes for cull ewes to 280-290c/kg.

Some 22,230 head of lambs and 1,875 head of cull ewes and rams were slaughtered during this period. 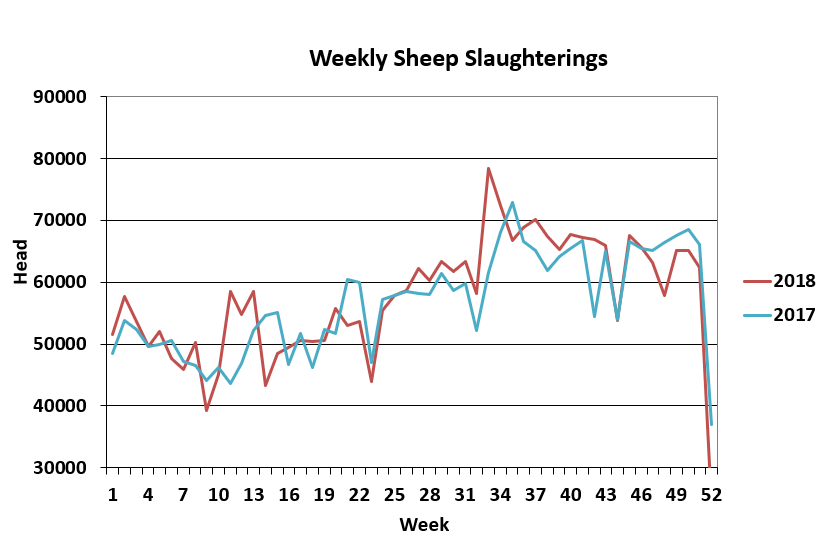 Official figures also show that almost 3 million sheep were slaughtered during 2018 in Department of Agriculture approved sheep export plants. This is a slight increase of 39,041 head or 1.3% compared to 2017 figures.

It was reported that the first sale of 2019 (January 3) at Carnew Mart saw some 2,087 sheep presented for sale.

It was noted that there was an excellent trade for all types, with heavy lambs selling for up to €121.50/head.

Tullow Mart hosted its first sheep sale of 2019 on January 2, with over 600 lots reported to have been on offer.

The trade was reported to have been lively for all types of stock, with a strong demand for well-fleshed lambs. In addition, one exceptional lamb weighing 53kg made €121.

It was also reported that cull ewes were a good trade – particularly feeding-type ewes. These lots fetched €15-22/head along with their weight. In addition, some in-lamb ewes made €150/head.

On January 5, Maam Cross Mart hosted its first sheep sale of 2019. On the day, it was reported that some 200 sheep were presented for sale. It was also noted that there was a good trade for all types, with a 100% clearance achieved.

It was reported that hill and cross-bred type lambs achieved an average price of €71/head, with a top price of €100/head achieved.

In addition, hoggets made – on average – €63/head, while hill-type cull ewes fetched an average price of €45/head.

The first sheep sale of 2019 at Raphoe Mart took place on January 7. It was reported that there was an excellent trade for all lots and a full clearance was achieved.