The trade for factory and butcher hoggets continues to remain buoyant across the country’s sheep marts, with the best of these making €2.40-2.50/kg.

According to mart managers around the country, store hoggets are still attracting plenty of purchasers with the hammer generally falling on these lots from €1.90-2.47/kg.

The trade for cast ewes has improved slightly in some venues with the better quality factory fit ewes making €120-136/head while the feeder types are trading at €40-60/head. 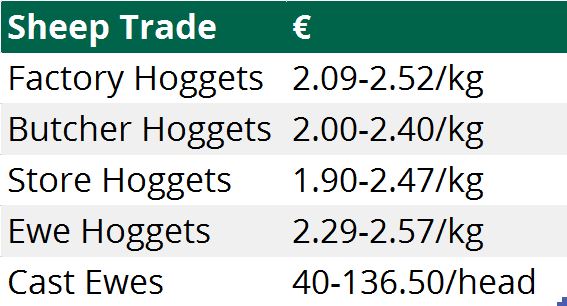 A small number of hoggets passed through the ring in Mountbellew Mart on Saturday, according to the Mart Manager Marianne Higgins.

These lots were generally well fleshed, good quality stock which traded from €2.09-2.42/kg, she said.

There was also a small number of ewe hoggets on offer which generally made €2.42-2.57/kg, while store lambs also met with a strong trade and prices for these lots ranged from €88-106/head.

The large number of cast ewes on offer were in strong demand, this was especially the case for heavy fleshed lots. The hammer fell on these lots from €85-126/head.

There was a nice entry of sheep on offer in Roscommon Mart last Wednesday, according to the Mart Manager, Maura Quigley.

The average price for hoggets was slightly better than the sale held prior to the Christmas break with the hammer falling on mixed lots at €2.23-2.45/kg. Ewe hoggets made €2.29-2.37/kg.

She also said that there was a very strong trade for cast ewes with prices reaching as high as €136.50/head, but the prices paid ranged from €60-136.50/head.

There were 650 sheep on offer in Kilkenny Mart on Monday, according to the Marts Auctioneer, George Candler, with a sharp trade resulting in a complete clearance.

The sheep trade continued to remain lively in Fermoy Mart on Monday, according to the Mart Manager Sean Leahy.

Store hoggets also remained in good demand, with the hammer falling on these lots from €2.26-2.47/kg, he said.

Cast ewes also remained in strong demand with the hammer falling on the best of these lots from €118-130/head while feeder types sold from €60/head.