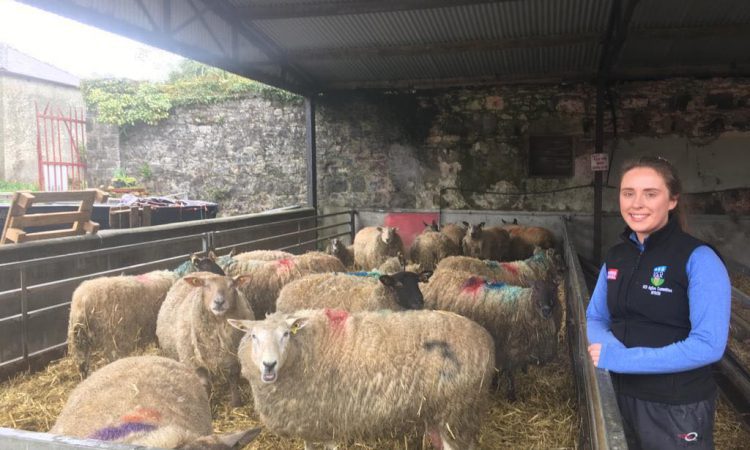 In this week’s sheep focus, AgriLand caught up with Sarah Woodmartin, who runs a mixed-farming enterprise alongside her family in Co. Sligo.

Sarah, who is studying Animal Science at University College Dublin (UCD), is in her final year of her undergraduate degree.

Due to the coronavirus outbreak, her college semester was cut short, which saw her head back out west to help out on the family farm.

Speaking to AgriLand, Sarah explained: “I arrived back home in time for the lambing season, which I would have been around for anyway, as I have two weeks off for my mid-term break from college.

“However, I didn’t envisage that I would still be here at the start of April; however – considering the situation the country is in at the minute – being at home is the safest place to be.

“It has been a busy few weeks, between lambing down the ewes and calving down the cows, so I have been kept occupied with that, as well as keeping on top of my college work.”

The Woodmartin family run 270 ewes and 20 suckler cows on 140ac of good-quality grassland, as well as keeping 600 free-range hens.

The flock is made up of a number of different types of ewes, which include: Charolais; Suffolk; Belclare; and mules.

The farm operates a mid-season lambing system, with 20% of the ewe lambs kept as replacements, while the rest of the lambs are finished, predominately, off a grass-based diet.

The lambing season kicked off about four weeks ago and the hope is to have the last of the ewes lambed down by mid-April.

This year, the lambs that won’t be kept as breeding replacements are going to be finished off grass and sent to the factory from July onwards.

Last winter, 40 lambs were finished indoors, with the last of them sent to the factory by December. 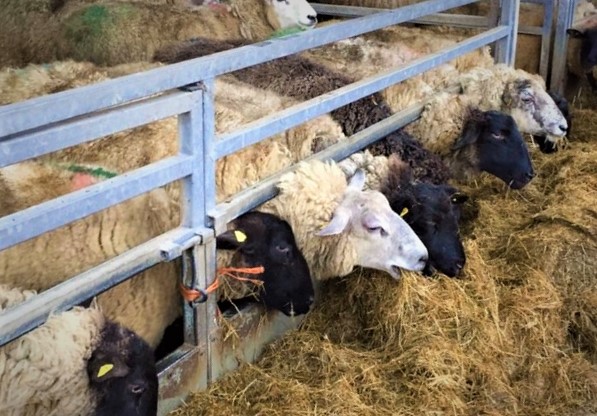 Sarah was very happy with how the breeding season went, with the mature ewes scanning 2.0 lambs, whereas, the ewe lambs scanned 1.4 lambs.

Speaking about the scanning results, she said: “It was a very successful breeding season for us. In my opinion, there was a number of different factors behind the good results.

“We find that the Belclare and mule ewes are quite prolific. Also, the fact that we let such a big team of rams run with the flock was also possibly another factor behind the good results.

“We changed the raddle on the rams three times throughout the course of the breeding season, as well as switching the rams between the different batches of ewes.

“We had very few barren ewes, which was great; so all in all, we couldn’t be happier with how it went.” 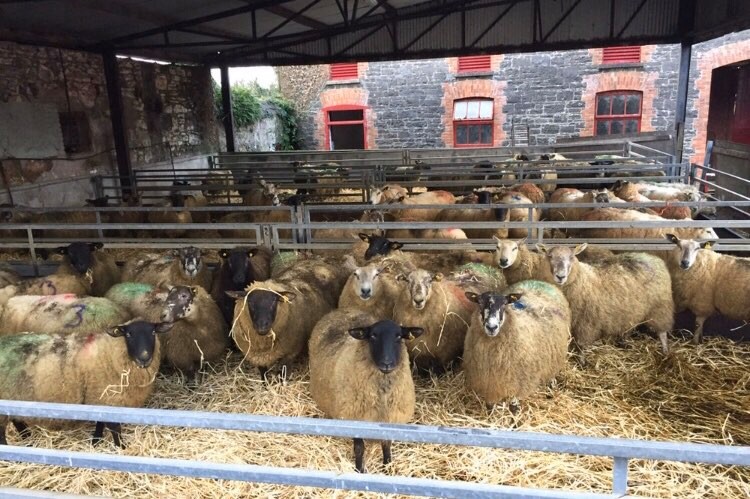 Pre-lambing nutrition is very important to get right in the weeks leading up to the lambing period, in order to avoid animal health issues and to make sure that ewes are in good condition, as well as having plenty of milk for their newborn lambs.

So, to make sure that their ewes were in peak condition, a major emphasis was placed – going back all the way to last summer when the pit silage was being made – on making sure that the ewes would have access to good-quality fodder during the housing period.

Sarah explained: “The final few weeks of the gestation period are critical to get right, in order to reduce the risk of any health problems arising.

All the ewes were fed silage that had a dry matter digestibility (DMD) of 75%, as well as getting concentrates.

“All the ewes had a relatively good body condition score (BCS) coming into the lambing period of about 3.0. So far, we have had no issues such as prolapsing or twin-lamb disease, so our nutrition plan seems to be working quite well.

“The ewes are fed concentrates in the last eight weeks of the gestation period. Each week, we gradually build up the amount of meal we feed each batch, until a week or two before lambing.”

Listed (below) is how much concentrates the ewes were getting, in the final week of pregnancy.

The busy lambing season kicked off in the first week in March, according to Sarah. Over the course of the winter, the flock was housed in both slatted and dry-bedded facilities.

The majority of the flock lambed down in the straw-bedded shed. As the ewes lambed down in the dry shed, they were moved out to pasture as soon as possible, to make space for ewes that were close to lambing in the slatted unit, so that they could lamb down on straw.

However, some of the ewes did lamb down on the recently converted slatted unit, which has the capacity to hold over 100 ewes.

The cattle shed was used to house 30 ewes and their lambs while the weather was bad and unsuitable to let stock out onto pasture.

So far, 220 ewes have lambed down, with another 50 to go, in what has been a busy few weeks for the Sligo-based family. 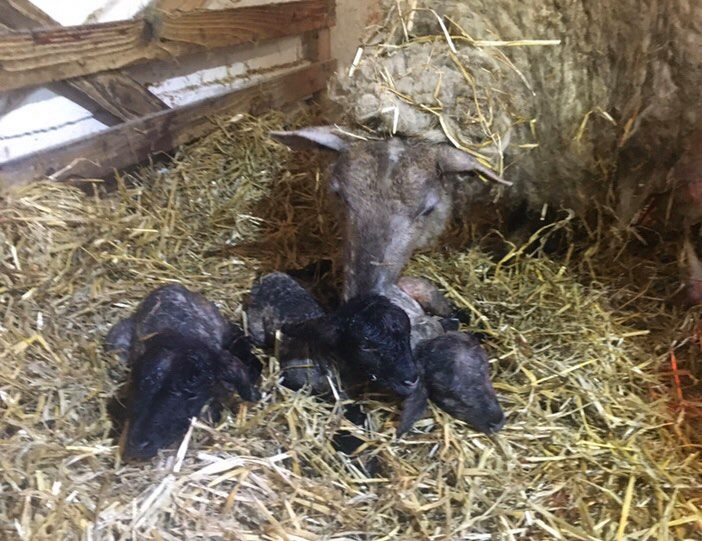 Sarah added: “So far, we have been very happy with how the lambing period has gone. We made sure that the shed was set up well, to make the job as efficient as possible and reduce the workload on ourselves.

“We had individual pens set up before the first ewe lambed. In general, ewes and their lambs are kept in these pens for a minimum of 24 hours and a maximum of 48 hours.

“We place a huge emphasis on good hygiene practices, especially when it comes to keeping the individual pens clean.

By doing the simple things right, it will help to reduce losses and enable us to get the ewes and lambs out to grass as soon as possible.

“Our housing facilities have been under serious pressure over the last few weeks, as we haven’t been able to get stock out, due to the bad weather.

“However, thankfully, over the last week or so, we have been able to let out the majority of the flock.”

As mentioned previously, the poor weather conditions over the last few weeks have been challenging for both Sarah and farmers alike across the country.

The bad weather has meant that turnout dates have been pushed back and the first round of fertiliser, in most cases, has only been spread in the last week or so.

Sarah added: “This spring has been particularly challenging, mainly because of the poor weather. We had a big backlog of ewes and lambs in the shed for a few weeks, that would normally have been let out to grass a day or so after lambing.

“Over the last week, the ground has dried up fairly well and the weather has improved, which enabled us to get the majority of the sheep out to grass and free up some space in the shed.

Currently, 40 ewes and their lambs are grazing ground that will be cut for silage in the summer.

“However, the plan is to keep the ewes in groups of 80, where we will give them access to paddocks – that were closed off over the winter.

“After a couple of days or whenever we feel that the paddock is grazed out, they will be moved onto the next field.” 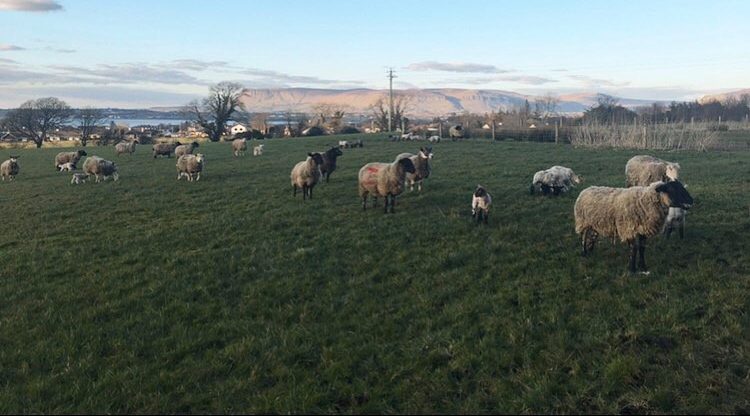 She added: “Each time a paddock is grazed, we will spread fertiliser on it and hope – that if the weather comes good – that there will be a good cover of grass on it by the time the flock are due to move back onto it.

“We were able to get fertiliser onto the land for the first time this year, last week, which is probably the case for many farmers across the country.

We spread 25kg/ac of urea on the grazing ground, which should hopefully boost growth rates in the coming weeks.

“At the moment, the triplet ewes are being run as a separate flock. These ewes – and their lambs – are being supplemented with concentrates.

“Currently, triplet ewes are receiving 1kg of concentrates a day, while the single and twin ewes are also getting 0.5kg daily. Hopefully, come April 10, the ewes will be on a grass-only diet.”

The Woodmartin family are firm believers in taking records at lambing time, as they feel it is the only way to improve the efficiency of the flock.

Sarah explained: “Throughout the course of the lambing season, any ewe that had any issues, whether it be a hard lambing or a health issue, that animal would be marked and recorded.

“These marks will make the job of identifying what ewe lambs will be kept as breeding replacements and what lambs will be finished for the factory easier.

“All of the lambs’ tails are docked with rubber-rings; the ram lambs are also castrated using rubber-rings.

“The majority of the ewes we cull every year is mainly down to age, as we try to keep a young flock as much as possible.”

Due to the outbreak of the coronavirus in Ireland, Sarah’s plans have been turned upside down. After she finishes her undergraduate degree, she is unsure of what her next step will be.

She explained: “Before the whole coronavirus outbreak, I wasn’t entirely sure what I was going to do after college. I was in two minds about whether going back into education again or go look for a job.

“At the minute, the way it’s looking, I’ll be staying at home helping out on the farm, which is great as well. The isolation period is hard, but at least I have the option of going out to the yard every day, which takes your mind off the whole situation.”

Thanks to Sarah (and all involved) for help in compiling this piece remotely (and for sending in pictures). Due to ongoing coronavirus (Covid-19) restrictions, on-farm visits are not possible at this time. 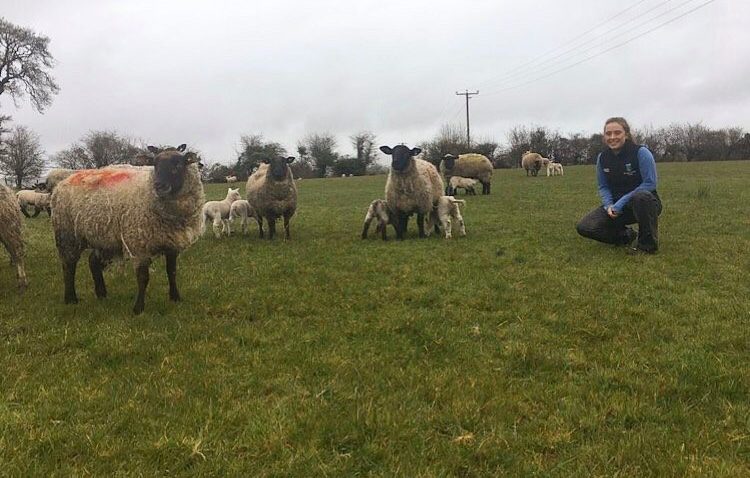 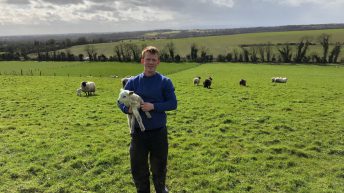 Sheep focus: ‘It was a safer option – financially – investing in ewes rather than cattle’