A second trial into Monsanto’s Roundup product in the US has found that the herbicide was the cause of a man’s cancer in California.

The phase one verdict of the court proceedings ruled in favour of the plaintiff Edward Hardeman in the case of Hardeman versus Monsanto, a trial conducted in the federal glyphosate multi-district litigation before Judge Vince Chhabria in the Northern District of California.

The jury reached a decision in this first phase on causation, but still must decide the question of liability in phase two before there is a final verdict in this case.

In a statement reacting to the court findings, Bayer – owner of Monsanto and the Roundup product – said: “We are disappointed with the jury’s initial decision, but we continue to believe firmly that the science confirms that glyphosate-based herbicides do not cause cancer.

“We are confident the evidence in phase two will show that Monsanto’s conduct has been appropriate and that the company should not be liable for Mr. Hardeman’s cancer.

Regardless of the outcome, however, the decision in phase one of this trial has no impact on future cases and trials because each one has its own factual and legal circumstances.

“We have great sympathy for Mr. Hardeman and his family, but an extensive body of science supports the conclusion that Roundup was not the cause of his cancer.”

Bayer said that it stands behind its products and will continue to “vigorously defend” them.

“Roundup products and their active ingredient, glyphosate, have been used safely and successfully for over four decades worldwide and are a valuable tool to help farmers deliver crops to markets and practice sustainable farming by reducing soil tillage, soil erosion and carbon emissions,” the statement continued.

It highlighted that regulatory authorities on a global scale consider glyphosate-based herbicides as “safe when used as directed”.

The pharmaceutical giant claimed that there is an “extensive body of research” on glyphosate and glyphosate-based herbicides, including over 800 studies submitted to the Environmental Protection Agency (EPA), European and other regulators in connection with the registration process, which it says “confirms that these products are safe when used as directed”.

Bayer pointed to a number of studies which came to this finding in its concluding statements.

This follows an earlier case filed by claimant Dewayne Johnson, a California groundsman and pest manager who, in 2016, alleged that his non-Hodgkin’s lymphoma was caused by Roundup and Ranger Pro – another Monsanto glyphosate herbicide.

The jury for that case ruled that the company was responsible for negligence in failing to warn users of the potential risks of using the weedkillers, ordering Monsanto to pay millions in damages. 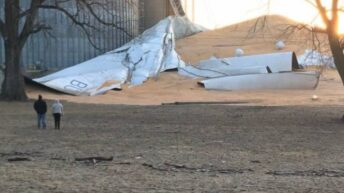