Liam and Justina Gavin left the UK in 2012 to farm in Boyle. “We had moved to Devon in the UK, from Dublin, in 2001 – to set up a holiday business. We were living in Brixham, a small fishing town on the south coast of Devon where I grew up,” said Justina.

“All our three children were born there. The business grew from handling three seaside apartments in 2001, to becoming one of the largest in the south-west of England, managing over 1,200 four and five star luxury self-catering properties when we sold our share in the business in 2016,” Justina said.

“We spent a long time looking for the right holding to buy in Devon and Cornwall until 2005; Liam’s uncle and aunt, James and Peggy Tonra, told Liam they would like to leave the family farm in Corrigeenroe, Boyle, to him,” she said.

“We spent annual family holidays in the area until, after James’s death, Peggy invited us to move back to the farm permanently. The original holding was 40ac of marginal land, sloping down to the Lough Key lake shore,” said Justina.

“Originally a small dairy farm, James had leased some of the land since his retirement in the ’80s, but other than that the farm had been largely untouched since.”

When the couple arrived in Boyle, Liam cleared fields and tracks, repaired hedgerows and walls and stock-proofed the land. He worked on soil fertility and weed management.

They cleared the old orchard and constructed polytunnels, as well as a timber farm-building to house livestock, feed and machinery. They also built a small staff canteen and packing shed, with a view to getting a business off the ground.

“We went into organic conversion with the Organic Trust Ltd in 2013, and achieved organic status in 2015,” said Justina. “Our Dexter herd was established in 2013 with a handful of breeding animals. We also bought in breeding pedigree Berkshire and Tamworth sows, Jacob and Shetland cross ewes and a ram, and began our flock of laying hens.”

Over the last five years, Liam added pieces of land around the lake, and the holding now stands at 130ac. “In 2014, we had our first produce for sale, so I took to the roads with a shepherd’s hut-style gourmet burger trailer,” Justina said.

“We toured some of the largest and smallest festivals in Ireland including: Electric Picnic, where we received a McKenna guide award; the Ploughing Championships; and even squeezed the hut onto the tiny ferry out to Arranmore Island in Donegal.”

For Christmas of 2014, they opened a pop-up farm shop and butchery in the town of Boyle.

In 2015, they parked their shepherd’s hut in the garden of a property they had bought in the town centre, and began serving their organic Dexter burgers and outdoor pork hot dogs to the local population. “The Drumanilra Farm Kitchen was born,” said Justina.

“Since then we have gradually developed the property in Boyle. The Drumanilra Farm Kitchen is now a small indoor cafe and farm shop, with a wood-burner, kids’ corner and outdoor garden seating.

Every dish on the menu includes an ingredient produced on the farm. We also source other local and Irish artisan products to use on the menu and serve in the farm shop.

“All organic meat, vegetables, flour and milk is used in the cafe. All the Dexter beef, pork, lamb and salad leaves are produced on our own farm,” she said.

“We also serve organic chicken, Angus beef and other seasonal organic vegetables. In 2017, we were awarded best customer service in Co. Roscommon in the Irish Restaurant Awards. 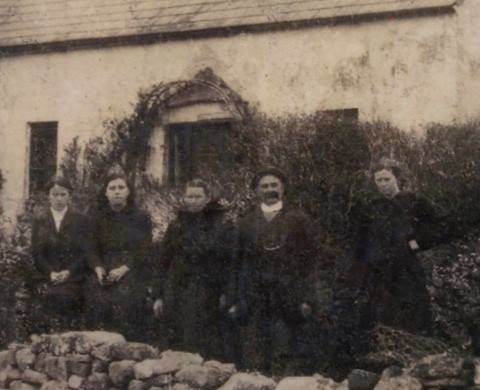 The whole project has been a major challenge and a steep learning curve for the couple.

“From reclaiming and renovating the holding, building a new timber-frame energy-efficient family home on the farm, renovating the property in Boyle, to building a reputation and following for a start-up business in a quiet rural town,” said Justina.

Then there has been the raising of three young children through it all. “Our oldest boy Fionn was six and the twins, Aaron and Emily-Anne, were busy toddlers at just three years old, when we moved here,” Justina said.

It has also been a massive adventure. We have had to learn most things from scratch.

“Liam has an agriculture degree and spent summers helping out on the farm here, but not much is available in terms of advice and supports for the kind of mixed farming we are trying to do,” she said.

“He found very little access to advice on outdoor pig breeding in Ireland and pretty much had to learn everything from his own research. Likewise, at the time we began with Dexters, there was very little interest in the breed. This is changing now with a listing in the rare-breed section of the GLAS scheme,” Justina said.

“A further major issue for us was that the farm had no fit-for-purpose farm buildings or any kind of infrastructure.

“While we kept an allotment in the UK, and have a keen interest in organic gardening, establishing a commercially viable market garden for the farm has been a completely new venture for us and is still a work in progress.”

The couple’s experience with their previous businesses helped them establish their Roscommon enterprise.

“But again the idea of taking on every link in the food chain, from farming the produce through to serving it to our customers on our plate, is fairly unusual in Ireland and has a very particular set of challenges,” Justina said.