In the first six months of the year, UK shipments of meat are reported to be up almost 1% on the year, at 54,300 tonnes, according to EBLEX.

The figures show that the latest UK trade data includes some upwards revisions to previous data. As a result the position for beef and veal exports is more positive than developments in the year so far were indicating. This modest uplift mitigated a fall in the unit price to a limited extent; however the value of the export trade was still back 4% year-on-year to £182 million, EBLEX says.

Overall, volumes to other EU Member States were broadly level and still accounted for the bulk of all shipments. However, bucking the trend to most other EU destinations of any significance, shipments to the Netherlands increased 10%. Consequently, the Netherlands replaced Ireland as the largest market for UK beef and veal exports over the first six months of the year for the first time since 2011. 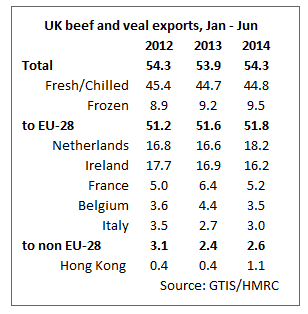 Despite still relatively small volumes, in the first six months of the year beef and veal shipments to non-EU markets increased 7% on the year. Hong Kong is now the most significant market outside of the EU.

Exports of fifth quarter products are up over 20% on the year to 18,700 tonnes. Shipments to other EU markets are 14% higher compared with the first six months of 2013, largely fuelled by growing demand in Ireland, the Netherlands and Poland.