Over 150 workers employed in a meat plant in south Co. Kilkenny have been purportedly laid off temporarily amid the continuing Beef Plan protests, according to reports.

The workers at Dawn Meats, in Grannagh, near the Kilkenny/Waterford border, were apparently issued letters by management this evening, Wednesday, August 7, to inform them that temporary layoffs have had to be considered by the firm, according to RTÉ News.

In addition, the national news broadcaster reports that at least two other plants owned by Dawn Meats are understood to be similarly affected.

RTÉ goes on to note an industry source view that the issue of temporary layoffs “has to be examined by meat factories as the protests continue”.

The move comes amid ongoing protests outside approximately 20 meat factories around the country by farmers, organised by the Beef Plan Movement.

Meanwhile, earlier today, it was revealed that the cattle kill for the week commencing on Monday, July 29, was back by 16.83% when compared to the previous week’s kill.

The number of cattle presented for processing dipped by 5,898 head last week when compared to the week commencing on Monday, July 22.

The total number of cattle processed last week was 29,138 as opposed to 35,036 head the week before last.

This brings the total number of cattle presented for processing in Department of Agriculture approved slaughtering plants this year, as of the end of last week, to 1,072,727 head. 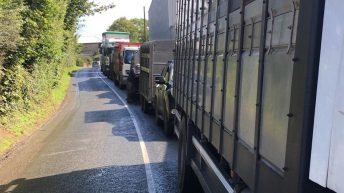