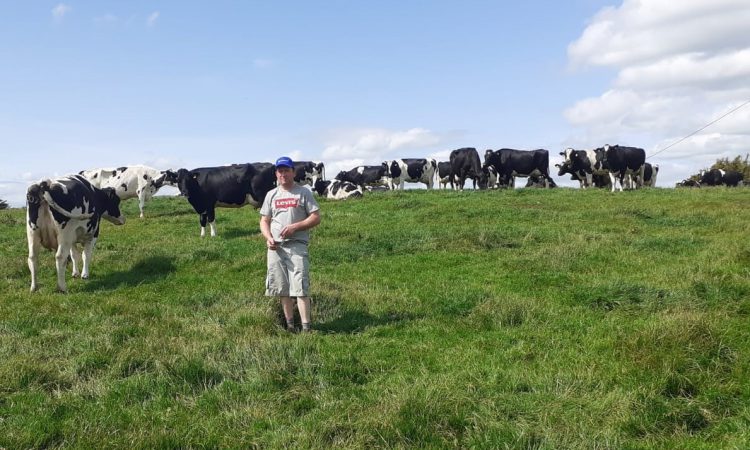 Austin Grealy on his farm in Co. Galway

In the final installment of the Soil Fertility Series in association with Grassland Agro we caught up with Austin Grealy, who milks a herd of 100 Holstein cows in a 30:70 split calving system supplying his milk to Aurivo.

Austin farms in Oranmore, Co. Galway, along with his father James, on a dry limestone farm; drought can be an issue on the farm. The herd performance is exceptional at 8,500kg of milk per cow. Top class silage is crucial to the system and first cut silage was mowed on May 10, 2020.

Austin has been working with Grassland Agro agronomist Gordon Grant, who has developed a fertiliser plan for the farm. The plan focuses on improving soil fertility and using N-Process nitrogen as a nitrogen source to improve grazed grass and silage quality.

“It’s important to spread fertiliser where it is needed so that it is not wasted,” Austin noted.

We focus on producing top-quality silage and grazed grass for the cows as they are high yielding animals. The plan is working well and I get great support from Gordon.

Austin’s silage ground is on an out farm and his soil samples have shown that the potassium levels need some attention. Based on the soil samples Gordon developed a fertiliser plan for Austin to help rectify this area.

There is a view that the biggest issue with growing silage on sub-optimal soil fertility fields will produce a silage crop that will have lower P and K contents, and therefore the slurry will have low P and K as a result. While this may be true to some extent, the far more serious consequence of sub-optimal fertility is that the silage crop yield will be badly hit.

The role of potassium (K)

The role of potassium in the plant is to regulate the opening and closing of the stomata, which control the rate of CO2 uptake of the plant which is critical for photosynthesis.

K is crucial for the production of adenosine triphosphate (ATP) which is a very important energy source for plants. Drought and disease resistance can be improved by optimal potassium levels and aid in protein and starch synthesis.

The challenges of K

K is one of the more abundant and stable nutrients in our soils. However, the soil does impact on the potential availability of K to grass and crops. Firstly, the total stock of K in the soil varies with different soil parent materials.

However, many soils with very high total K content can still be K deficient as most of the K is fully and permanently locked into the sand silt and clay particles.

The main driver of K fertility in soils is the ability of the soil to act as a temporary store of K and other nutrients by way of a soil characteristic known as the cation exchange capacity (CEC). This is a measure of the soils ability to hold and release nutrients such as K, and also calcium, magnesium, sodium and many micro-nutrients.

Soils with high CEC levels usually have high clay and organic matter contents. These soils are better able to bind and hold onto K after application.

The CEC process has the advantage that these nutrients can be re-released when required by the roots, so while the nutrients are held by the soil and protected from leaching, they can still be available to the plant at a later stage as required.

Therefore, soils with higher clay contents are better at holding K than soils that are lighter or sandier in texture. Also, soil acidity (low pH) also affects the CEC, so K works best in soils that are limed to the optimum pH for the crop.

One notable exception to how K can behave is in soils that tend to be ‘K-fixing’. This happens when a particular type of clay mineral present in some soil types reacts with K in a way that makes it more permanently fixed than with other clays.

Building soil K fertility is a challenge in these soils and little and often applications are generally advised.

Limestone soils with high clay content are most associated with K-fixation, and is commonly found in the north-east of the country, particularly in soil types such as the ‘Athy’ soil series. 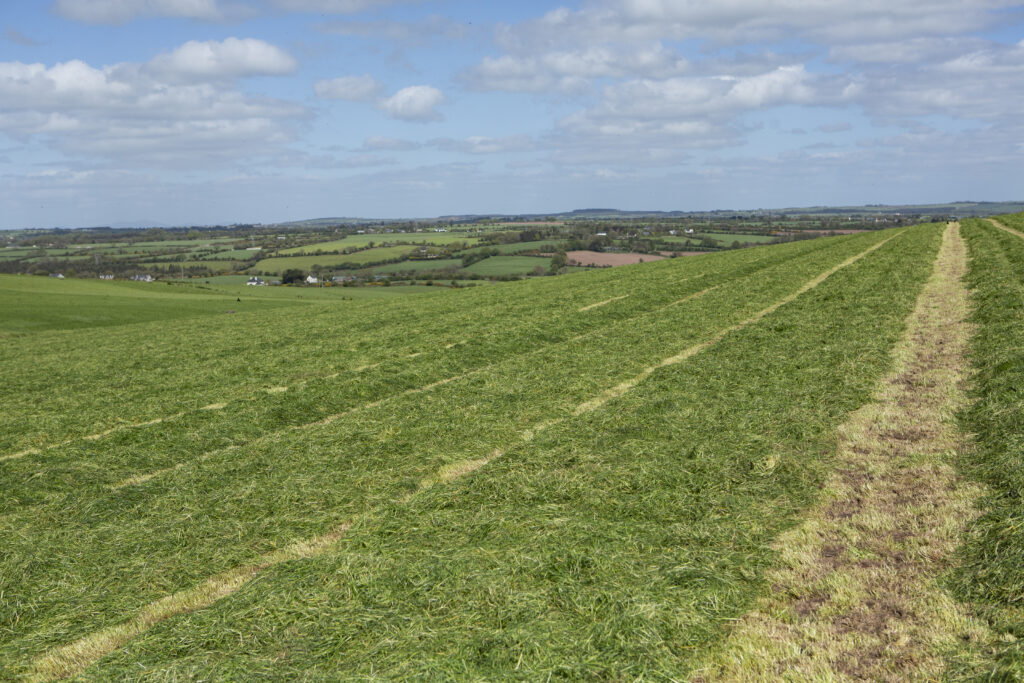 It takes 4kg of P and 30kg of K to grow 1t of grass DM. In a grazing situation 90% of the K is returned to the soil through excretion from the animal, typically in urine.

If a farmer was to grow 15t DM/ha and utilise 12t DM/ha, the offtake is only 36kg of K/ha. However, in a silage situation all the K is removed from the field.

Surplus bales are used as a grassland management tool on farm, it is essential to return the nutrients that have been taken off.

The rule of thumb is that for every four bales that are removed from a field, 1,000 gallons of thick slurry should go back in.

Zero-grazing has risen in popularity but it has a significant draw on soil nutrient reserves as no P or K is being recycled in dung or urine.

Every zero-grazing at a cover of 1,500kg DM/ha will remove 6kg of P and 45kg of K, and the nutrient removal will increase as the cover does.

Pit silage is often contracted out on farms and the yield of crops is not being gathered. In many cases, the yield being cut can often be well above the normal ‘average’ yield of 5t/ha of dry matter (equivalent to approximately 10t of fresh grass per acre).

The old rule of thumb of 10t fresh weight/ac which would equate to 5t DM/ha of first cut silage has been surpassed.

The P and K content per tonne of DM in silage swards is slightly lower due to a higher fibre content, at 3.5kg of P and 25kg of K/t DM.

You can’t manage what you don’t measure

Grassland Agro agronomy advisors conduct silage yield measurements for farmers and the yields have been found to be up to 10t DM/ha or 20/t fresh yield/ac.

Without measuring the yield, we cannot provide the best recommendations for a farmer on their fertiliser plan. Through yield measurements we can advise farmers on how to replenish soil reserves post-harvest.

Anecdotally, the possible reason we have lost touch with silage yields is due to the increased use of silage contractors and the increase in the size of machinery, and improvements in varieties and agronomy. 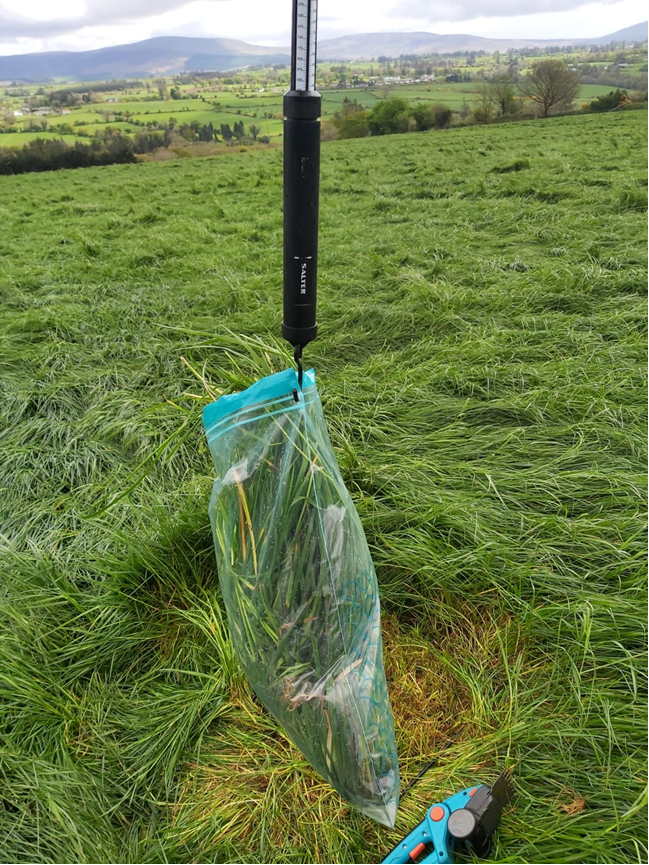 Taking silage yield measurements is an important task to develop an accurate fertiliser plan. It is also critical information for the farmer to make farm management decisions.

To build K levels in the soil or to replace off-takes the best timing is in late summer or early autumn. This allows the soil potassium and magnesium levels to normalise and reduce the prevalence of grass tetany on grazing ground or luxury uptake of potassium in silage crops which can cause milk fever.

On silage ground that will be cut twice or more it is advisable to apply K (either organic or chemical) to the maximum recommended rate before each cut to ensure that the deficit is not too large to balance in the back end.

K levels are low on Austin’s farm despite returning slurry to silage ground. This is the case on many farms. Despite K which has been removed in silage being returned as slurry.

However, if the field is low in K to begin with we are only cycling nutrients and we will not be able to build our indexes, and introducing supplementary potassium is necessary.

This can also be influenced by the higher DM production exceeding the balance of nutrients applied. The results of a slurry test is valuable information to have on farm to determine the exact application rate of nutrients.

Ensuring sufficient available potassium in the soil is crucial for the plant to achieve its maximum yield potential and maximise nitrogen use efficiency. The nitrates directive does not limit the rate or timing of potassium applications.

Back to the farm

The breeding season is going well for Austin. He was synchronising heifers for AI during the weeks and at present grass growth is exceeding demand despite drought pressure. However, he is focused on keeping on top of grass growth and management. 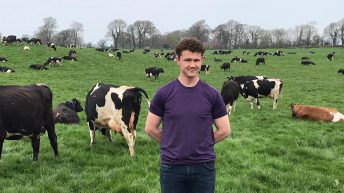