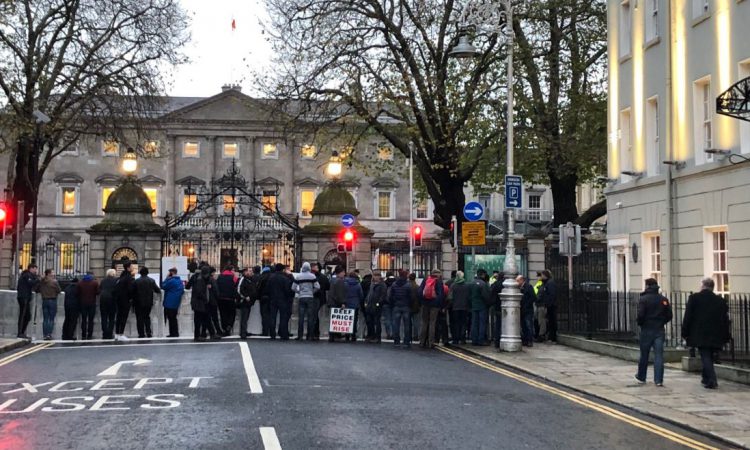 A cohort of the protesters in Dublin today are seeking a meeting with Michael Creed, the Minister for Agriculture, Food and the Marine, for the purpose of handing in a letter to him.

One of the protesters today, Paraic Brady – a county councillor from Longford, told AgriLand that if they were unsuccessful in securing a meeting with the minister, they would “stay overnight” and “our tractors would stay overnight”.

Brady, he explained today, has an injunction against from ABP-owned C & D Foods, arising from a protest that took place there. He said that the issue of injunctions – affecting one other individual from the C & D Foods protest – was one of the main points of the letter to the minister.

According to Brady, the minister must “clarify these injunctions, that they were a part of the initial talks, and that C & D Foods and MII [Meat Industry Ireland] never informed anyone at the meetings that they weren’t part of the talks.

The issue of price is also “one of the demands” according to Brady.

He added: “They’re handing in a letter to the minister regarding where we stand with the beef crisis at this minute in time…and the beef price in the north [Northern Ireland] and in England compared to the base price here.”

Another issue for which these protesters are seeking redress is the delay in reconvening the Beef Market Taskforce, demanding that it “gets up and meets immediately”.

According to one TD who attended the protest, the action today “indicates a very serious situation in rural Ireland”.

Independent Tipperary TD Mattie McGrath noted that today’s situation is relevant “not only in farming but in wider farm communities also”.

“The issues are non political and non farm-leader led. It’s ordinary people that are here to express their serious concerns and serious anxiety over the situation pertaining to rural Ireland and farm families,” McGrath argued. 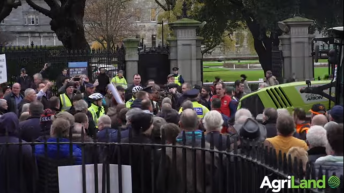