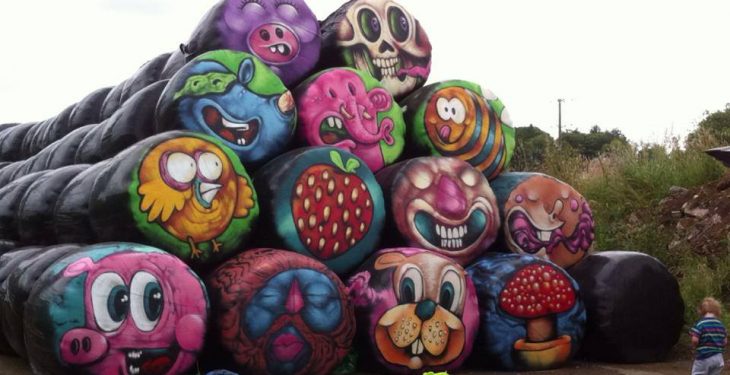 If you’ve been driving near Fivemiletown in Co. Tyrone recently, chances are you’ve spotted some rather interesting looking bales.

Driving along the A4 will be able to see bales covered in graffiti, with a mix of animals and food on show to the road.

Kevin Largey, the artist spray painting the designs on the bales, was asked to do the artwork by the Sliabh Beagh Cross Border Partnership Group.

The Sliabh Beagh Partnership is made-up of 13 community groups who reside within or near the Sliabh Beagh mountain which is along the border between Fermanagh, Tyrone and Monaghan.

Its aim is to develop and implement a series of community-based programmes for addressing the social, economic, cultural, environmental and good relations needs within a border region that has been impacted heavily by The Troubles.

Speaking to Agriland, Kevin said he received a call from the partnership group and that it was looking to do something that would stand out to engage with the local community.

“I’d be known for doing [this sort of work] on big walls but I said yes. It’s been crazy the amount of people that are interested in it.”

It’s been really good, I think it’s because it’s so different. You’d see this stuff in bigger cities, it’s street art taken out of context.

Kevin said that he was asked to do something light-hearted and fun but that he was left scratching his head for a time but that inspiration came to him in the form of his son’s toys.

“I’ll try to do as many bales as I can, I’ve got the front wall of them done and I’ve started on the side – I’d like to get one of the sides finished,” he said.

To see more of the bales featured check out Sliabh Beagh’s Facebook page.

Now this is an impressive use of tractors and straw bales at the Tour de France! 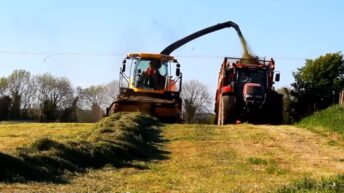 Video: Great footage of silage 2016 from mowing to packing the pit