Opinion: The days of bringing farmers on to the streets to protest are over 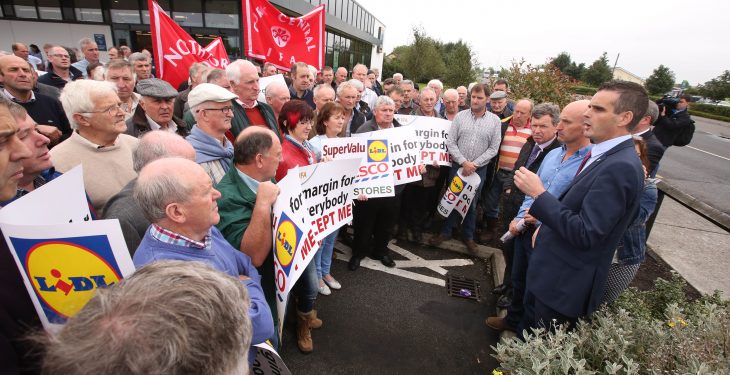 Who are the IFA trying to kid? The recent protest in Tullamore has as much chance of getting Irish farmers a better beef price as King Canute had of backing up the tide all those centuries ago.

The only way to get the factories and the supermarkets to sit up and take note is to hit them in their pockets. And one simple way of making that happen is to declare a standstill on all supplies of cattle to the plants for an agreed period of time – let’s say a week.

Modern red meat processing is all about guarantee of supply and ensuring that the capacity within a factory is being utilised at its optimal level continuously. I am not saying that every beef finisher in Ireland would heed such a call.

But, should the IFA push the button, surely enough farmers would rally to the cause, thereby giving the factories more than sufficient food for thought. And, besides, beef on the hoof is not a perishable product, as would be the case with milk.

And there is ample evidence to show that processors will become very farmer friendly when the supply of raw materials they need starts to dry up. A case in point is this week’s decision by Dale Farm in Northern Ireland to pay farmers an extra 4p/L (4.75c) on additional milk they produce during the months of October, November and December.

The driving force behind this decision is the fact that milk supplies to the co-op are down almost 5.0% year on year.

The other weakness in the IFA’s ‘protest strategy’ is the fact that the public at large are becoming heartily tired of them. Current opinion polls, for example, show that Dublin Bus drivers are losing the support of the travelling public when only a week ago the very opposite would have been the case.

But even if the strategy of a beef protest did hold up, one has to question the timing of the moves made by the IFA this week. They reached for their placards at a time when the details of the EU exceptional aid package are still being worked out and Minister Creed is contemplating whether or not the Irish exchequer will cough up the national top-up that can be made available under the terms of the scheme.

Meanwhile, Brussels is briefing that the EU will never use taxpayers’ money again to prop up farmgate prices, given the cost of the schemes announced over the past 12 months.

The general public are not stupid: they know full well that a significant proportion of their tax is being used to directly support Irish and other European farms. And they have no issue with the principle of food being made available to them at value-for-money prices.

The IFA is fundamentally correct when it calls for a fairer distribution of the monies that percolate down the agri food chain to farmers. But simply calling producers out on to the streets will not achieve this.

On the other hand, putting real pressure on Phil Hogan – who has repeatedly committed to a full investigation into the buying practises of the supermarkets – may well pay a faster and more fruitful dividend.