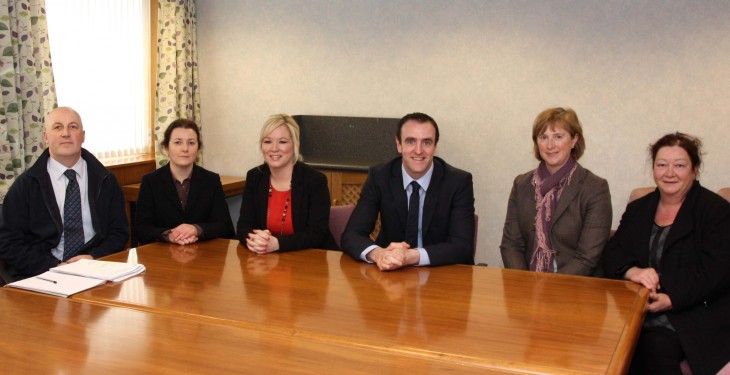 Local farmers are implementing a series of on-farm efficiency measures which are increasing their profitability and reducing the carbon footprint of the food they produce, Agriculture Minister Michelle O’Neill has said.

The Minister was commenting on the launch of the Greenhouse Gas Implementation Partnership’s Phase One Report.

Michelle O’Neill said: “I commend the Greenhouse Gas Implementation Partnership (GHGIP) on the publication of this report which outlines the many and varied efficiency measures being implemented on local farms to reduce GHG emissions and achieve cost savings. My department will continue to support the GHGIP as they lead the way towards establishing the north of Ireland as one of the most efficient and sustainable places in the world in which to produce food.

“The Partnership has demonstrated that local farmers are taking active steps to reduce their carbon footprint and I commend it on its efforts. The GHGIP is a perfect example of how the agri-food sector can work in successful partnership with government and environmentalists on important issues of common interest.”

Speaking at the launch of the report, Richard Moore, chair of the GHGIP’s sub-group on red meat said: “As a society we are faced with the dual challenge of producing enough food to sustain a burgeoning global population whilst minimising the carbon footprint of that food. As a meat exporting area, we have the opportunity to demonstrate to customers the sustainability of our beef and sheep farming. Conditions on this island mean that grassland livestock systems are generally the best means by which we can contribute to feeding the world. Local farmers have risen to this challenge by implementing the efficiency measures outlined in this report. In doing so, they have improved their profitability and reduced the amount of carbon used to produce food.”

Dr Mike Johnson, chair of the GHGIP’s dairy sub-group commented: “We are all aware of the importance of food, including milk exports, to the local economy. Northern Ireland is well placed to help meet increasing global demand, and to do so efficiently in terms of greenhouse gas emissions. As a Partnership, we are demonstrating the effectiveness of what can be achieved through industry and government working in common cause on a voluntary basis, and we would urge government to avoid policies which could cause any reduction in food production to meet arbitrary targets on aggregate emissions. Such an approach has the potential for unintended consequences and could actually increase global emissions as the requirement for food is met from farming in other, less efficient, countries and regions.”

Dr John Gilliland OBE, GHGIP sequestration sub-group chair added: “Agricultural systems are unique in their ability to sequester carbon from the atmosphere and lock it within the soil. The vital role which farmers play in managing this system must be recognised and supported. As a partnership we aim to enhance and protect the amount of carbon stored in our farming systems, thus ensuring that local agriculture maximises its contribution to the global battle against climate change.”

John Best, chair of the GHGIP’s arable sub-group, concluded: “If we can distil this report down to one key message is that a suite of efficiency measures exist which mean that every farm in Northern Ireland has the potential to lower its carbon footprint, and in doing so can achieve significant cost savings. We encourage every farmer to join the industry on the road to efficiency and sustainability, regardless of their starting point or farm type and size.”