As of June 2014, there were 294,200 dairy cows in Northern Ireland, an increase of 5.2% from 2013, figures from the Statistical Review of Northern Ireland Agriculture show.

The statistical review was compiled by the Department of Agriculture and Rural Development (DARD) Northern Ireland.

“The increased milk yield and the higher cow numbers combined to deliver a 9.4% rise in total output at 2.2 billion litres, which is a new record level of production in Northern Ireland.
The average gross milk price for 2014 was 6.5% lower than 2013 at 29.73p/l.

“The movements in average milk price across the period shown in this publication are a reflection of the fact that Northern Ireland is dependent on global commodity markets, where prices were rising throughout much of 2013 but have been falling during 2014,” the review says.

DARD says the average calf price was 20% higher than 2013 levels at £297 per head and the revenue generated amounted to £12m.

“Overall, the value of output of cattle and calves in 2014 (which deducts the value of imported cattle but includes breeding cattle exports and store exports) fell by 15% to £376m,” DARD says. 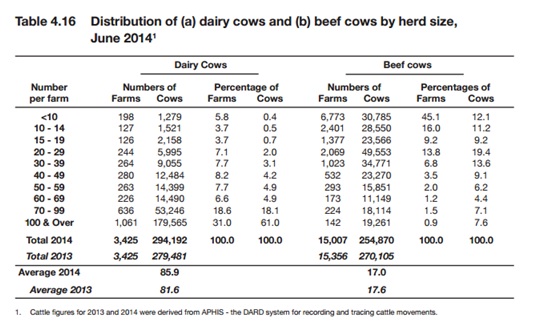