There has been no movement in lamb price this week as procurement managers battle over fit and under fit lambs to secure suitable carcasses for export.

According to procurement managers, the quality of lamb coming forward has dropped in recent weeks and they are finding it increasingly difficult to find good quality lambs.

Kepak Athleague continues to lead the pack with lamb price, as they are currently offering 565c/kg, while the two ICM plants and Kildare Chilling sit at 550c/kg.

Sheep numbers are beginning to tighten across the country, recent figures from the Department of Agriculture’s sheep kill data shows.

The sheep kill for the week ended February 14 stood at 41,103 head, which is a decrease of 5% on the previous week.

There has been a sharp drop in the week-on-week lamb throughput, which has dropped by 6% between the first and the second week of February, recent figures from the Department show.

The number of cull ewe and ram slaughterings have also decreased. The week-on-week kill for these animals has dropped by 243 head (4%) compared to the previous week. 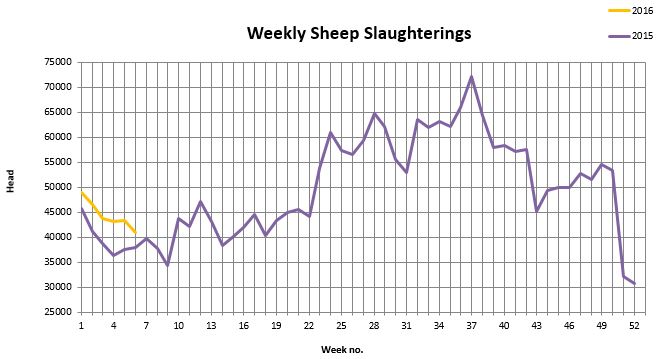 There has been some ease in the market for Irish lamb on the continent, according to Bord Bia, but a steady trade has been reported in the UK.

Recent figures from the AHDB and reported by Bord Bia show that British sheepmeat production has declined by 6% in January of 2016 compared to the same time in 2015.

In terms of trade, imports of sheepmeat into the UK in December 2015 was up over 40% compared to December 2014, which was the highest level in that month since 2005, Bord Bia says.

The French market was reported as slow on the back of an ease in demand and plentiful supplies of Lacaune lamb available and Bord Bia expects little change in this market in the coming weeks.

There has also been an increase in the number of sheep imported to the Republic of Ireland from Northern Ireland, recent figures from the Livestock and Meat Commission (LMC) show.