New additions from New Holland in 2013 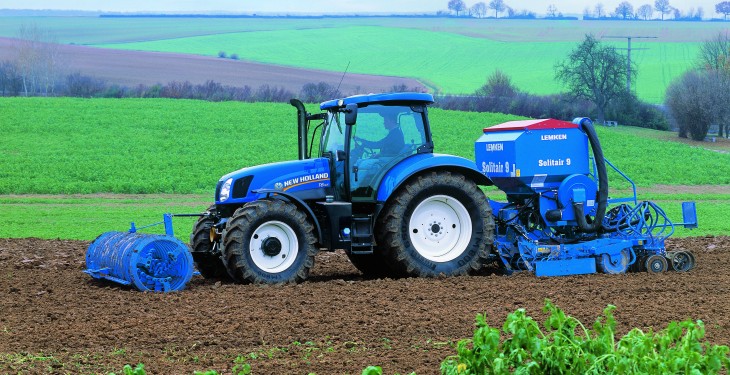 New Holland made a number of new additions to its product lines in 2013. Of note was the company’s new Roll-belt variable chamber round baler, new additions to the Blue Power Range, its upgraded T6 and T8 series tractors and its new TC5000 combine.

Back in June 2013 new Holland launched its new Roll-Belt variable chamber round baler. They say the baler has up to 20 per cent higher capacity and produces 5 per cent denser bales

According to New Holland the higher capacity comes from a new pick-up and feeder system. The baler also includes a customised feeding rotor options.

Available in 1.5 and 1.8 metre bale diameters, it will become the default choice for large livestock operations together with cooperatives and straw, hay and forage contractors

In February New Holland launched some new additions for its T6 range. Included in the upgrade was the Auto Command transmission for even greater efficiency, a new SideWinder II armrest and an upgraded Horizon cab

The six model T8 Series line-up, with outputs ranging from 273 hp to 419 hp, is powered by ECOBlue SCR Cursor 9 engines, developed in collaboration with FPT Industrial, and delivering Tier 4a emissions compliance.

Luca Mainardi noted that: “With a longer wheelbase and even more power on tap, the T8 Auto Command is set to improve its already impressive all-round performance. Furthermore, it perfectly complements the existing full powershift model range.”

At Agritechnica New Holland announced it is adding three new models to its Blue Power Range. The now five model line-up in the range features premium finishing and represents the pinnacle of tractor performance and comfort, according to New Holland.

It says the series has been designed especially for farmers and contractors who are looking to own a distinctively luxurious tractor.

Luca Mainardi said: “We have decided to extend the Blue Power range to include the T6.160, T7.250 and T8.420 Auto Command Models, alongside the existing T7.210 and T7.270 Auto Command tractors, to ensure that all farmers can own a piece of Blue Power elegance.”

New Holland has completely upgraded the TC5000 range of 5 strawwalkers. The market leader now in its segment according to New Holland, the TC5060, TC5070 and TC5080 develop between 175 and 258 harvesting horsepower.

Speaking at the launch Hedley Cooper, Head of Harvester Product Management stated: “The new TC5000 range is the culmination of many years of continuous development since 1992. The 50,000th TC combines will be produced in 2013, testament to its enduring success.”

He said: “We have completely redesigned the range, with many premium features including the all-new Harvest Suite Comfort cab, which will set the standard in this segment, multi-award winning Opti-Fan technology, together with the productivity boosting heavy duty Varifeed headers.” The TC5070 and TC5080 are also equipped with ECOBlue SCR technology engines for Tier 4A compliance, which reduces fuel consumption by up to 10 per cent.