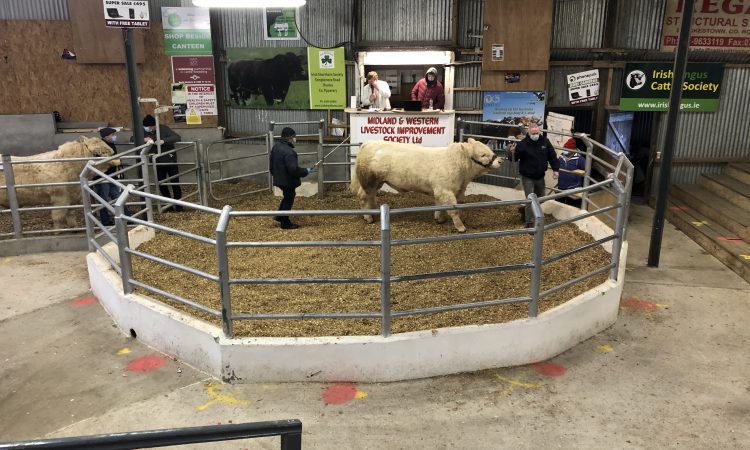 With the 2021 breeding season soon getting into motion, one of the first pedigree bull sales of the year took place in the showgrounds of Carrick-on-Shannon on Saturday, February 13.

As it was the first multi-breed sale of the sale hosted by the Midlands and Western Livestock Improvement Society, it saw mainly Angus and Charolais breeds on offer with a sprinkling of Hereford, Limousin and Shorthorn breeds also.

Overall, some high prices were recorded but the trade was challenging as only half the bulls on offer found new homes.

The sale was not helped by the snowy weather conditions and no customer presence at ringside to contest in the bidding. Some farmers are also holding on until the spring progresses further before they begin sourcing their bulls.

Angus bulls sold at an average of €2,352/head. Meanwhile, the small numbers of Shorthorn and Limousin bulls failed to meet their reserves.

Two Hereford bulls sold at an average of €2,000, with one Hereford heifer selling at €1,700. In the Charolais section, just two out of six bulls secured new homes on Saturday.

Topping the sale at €4,650 on the day was a September 2019-born Charolais bull exhibited by Martin Herity from Drumcliffe, Co. Sligo. Coolembley Pablo (pictured below) is a son of the legendary Doonally New and out of homebred dam by Gerard.

Five stars across the board on the Terminal Index was awarded to this bull, along with a calving figure of +6.4% on matings with beef cows. Being the last animal into the sales ring did not halt the sale of this bull, as he moves to new pastures on a farm in Co. Roscommon.

Sticking with the Charolais breed for the time being, the seventh highest price on the day was awarded to Killasser Panther, shown by Val Heaney from Swinford, in Co. Mayo.

This May 2019-born bull was a son of Goldstar Echo and was rated with a calving ease figure of +6.9% on beef cow matings. He is out of a homebred dam sired by Blakestown Obelix.

Moving onto the Angus breed, topping the sale of black bulls at €4,100 was Brideswell Sonny 230, exhibited by Karl Harrison from Co. Roscommon. This 23-month-old bull was one of the first animals into the ring on the day.

He is sired by the AI bull Duibhgiolla Luigi, and out of a homebred dam. Boasting a Terminal Index value of €80 and a Replacement Index value of €86, he travelled to his new home in Letterkenny, Co. Donegal, soon after the sale.

Local exhibitor Alan Gibbons from Strokestown in Co. Roscommon had a successful day with his offerings as he took home €4,000 and €3,500, respectively.

First up selling at €4,000 was Carrowboy Sully. Having failed to meet his reserve in the sales ring, he was snapped up afterwards by a Northern Ireland farmer.

Being a son of the well-known Rosemead Karona, his dam was sired by Goulding Jumbo King. Figures were in this bull’s favour, as he had a Replacement Index value of €101, alongside a calving ease figure of +1.4% on matings with beef cows.

The second of Alan’s exhibits was the April 2019-born, Oakwall Simon. After being bred by Sean McNicholas from Co. Roscommon, this Westellen Diego son was sold for €3,500. Again the Replacement Index of this bulls was ranked at €101, along with a Terminal value of €72.

A Drumcrow Joker son in the form of Drumcrow Popeye V773 claimed the fourth highest price on the day for Margret McKiernan from Corlismore, Co. Cavan. Selling at €3,600, this 20-month-old bull was out of a homebred dam, Drumcrow Petula T687, who was a daughter of Netherton Americano.

His stablemate, Drumcrow Sorento, sold for a slightly less figure of €2,600 shortly after. The sire this time was HW Fargahl T516, with Drumcrow Partner Perfect L475 being his maternal grand-sire. A healthy calving ease figure of +1.5% on matings with beef cows was awarded to this May-2019 born bull.

Both bulls were exported to Northern Ireland after the sale.

A second HW Fargahl T516 sired bull sold for €2,600 for Anselm Fitzgerald from Moate, Co. Westmeath. Caulry Showman had a respectable €118 value on the Replacement Index, alongside a calving ease figure of +1.5% on matings with beef cows.

Brian Faughnan from Bornacoola in Co. Leitrim sold his lot, Molloy Lord Hanson V285, for €2,450. Having one of the highest Replacement Indexes catalogued of €165, this Lanigan Red Mikado son was out of a homebred dam sired by Netherton Americano M703. He also had a low calving figure of just +0.7% on matings with beef cows. 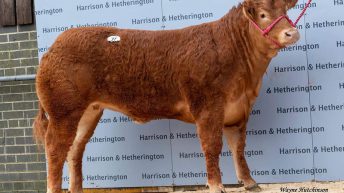