Environment Minister Edwin Poots has encouraged everyone to play their part in improving air quality and reducing the number of “avoidable deaths” associated with air pollution.

The minister was speaking outside the Ulster Hospital in Dundonald on Wednesday (November 25), where he launched Northern Ireland’s first-ever Clean Air Strategy alongside Fearghal McKinney, head of British Heart Foundation Northern Ireland.

The discussion document outlines the serious health impacts of air pollution underpinned by scientific research and discusses a range of important topics that impact on our air quality such as Transport, Agricultural Emissions, Industrial Emissions and Local Air Quality Management.

It poses a series of questions to bring forward ideas and views from stakeholders that will guide the development of policy options which will be presented in the final Clean Air Strategy for Northern Ireland.

According to the British Heart Foundation, air pollution is associated with around 800 deaths in Northern Ireland annually.

Minister Poots said: “Air pollution can have a serious effect on people’s health. Research by the British Heart Foundation estimates that hundreds of deaths in Northern Ireland are attributable to air pollution each year.

“Deaths attributed to air pollution are avoidable and that is why I am launching a discussion document on Northern Ireland’s first-ever Clean Air Strategy.

“Today, I’m standing opposite the Ulster Hospital, on a main arterial route into Belfast and on the edge of an Air Quality Management Area – which was designated as a result of levels of nitrogen dioxide from road transport.

How we live, work and travel has a huge impact on the quality of the air we breathe and whilst there is no silver bullet, there is a lot that we can do to better tackle our largest environmental health risk.

“This discussion document is a step forward in raising awareness among the public of the sources of air pollution and the adverse impact that their every-day decisions and behaviours have on the air we breathe, and ultimately our quality of life and lifespan.

“I would like everyone to respond and give us your big ideas. Every person who lives and works in Northern Ireland is affected by our air quality and can help to improve it.”

Head of British Heart Foundation Northern Ireland Fearghal McKinney added: “Each year, around 800 deaths in Northern Ireland are attributable to air pollution, with a significant impact on heart and circulatory health.

We estimate that, over the next decade, heart and circulatory disease deaths in Northern Ireland attributed to particulate matter air pollution could exceed 4,500 people.

“Air pollution is a major public health emergency. BHF-funded research has shown that particulate matter can have a seriously detrimental effect to heart health, making existing conditions worse, and increasing the risk of heart attack and stroke.

“We encourage people to engage in this discussion to inform a future Clean Air Strategy for Northern Ireland to reduce the public’s health risk from air pollution.” 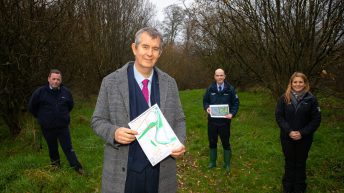