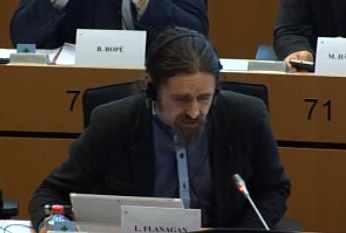 At a hearing in the European Parliaments Agricultural Committee, Flanagan sought clarification from Commissioner Hogan on the implementation of the new CAP particularly as to its impact on hill farmers.

“Farmers need clarity on this,” he told Commissioner Hogan.

Flanagan said that the EU needs to remember that one of the founding ideals of the Common Agricultural policy is to support all farmers and all types of land.

At the moment, he said that is not happening and added that many people fear that they are being left out altogether.

“There is a suggestion that this is not by accident because yet again this money is really targeted for the big rich farmers and it is only tokenism what you are at,” he said.

In response Hogan called out Flanagan on his commitment to Environmental issues.

“Mr Flanagan I’m glad to know you are an environmentalist again, you had a sabbatical for a while.”

Hogan did concede that there is a commonage problem certainly in Ireland.

However, he said a lot of there areas of concern have been addressed and other areas are being worked at present.

On the suggestion that small farmers are not catered for in the latest CAP reform Hogan said there is plenty of flexibility under the new CAP to support small farmers.

“Any suggestion to the contrary is just sound bites, that you might put to one side for awhile.

“You’ve got a good run out of that,” he told Flanagan.