Entries up at this years Millstreet Dairy Show 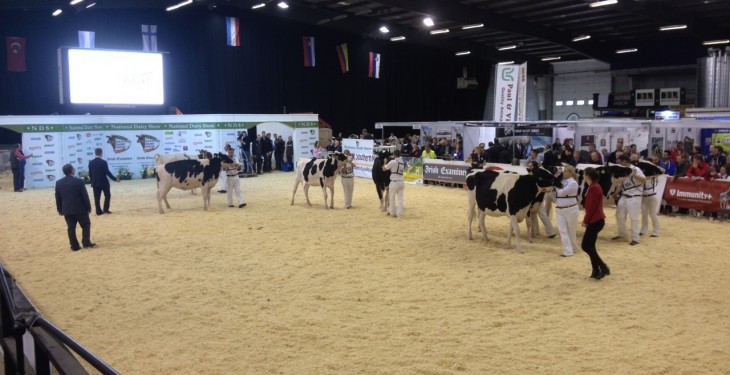 Organised by the Cork Holstein Friesian Breeders Club, the National Dairy Show in Millstreet last weekend was able to draw large crowds. Entries were up on last years event, with 240 Holstein Friesian and Jersey cattle on show.

Despite the recent fall in milk prices, trade stand space was sold out, a sign of the overall confidence in the dairy sector.

On hand was internationally-respected judge, Welsh based Iwan Rhys Morgan, who selected Glaslough Miss Petra EX91 as the winner of the Irish Examiner Supreme Championship. The five-year-old cow is owned by David and Kenny Boyd from Co. Monaghan.

An addition to this year’s event was the final of the IHFA Young Members Association Showmanship Leader competition. With just under thirty individuals talking part, honors again went to County Monaghan with Andrea Rafferty securing first place in the Under-26 category. In the Under-16 category, first prize went to Corkonian, Claire Kirby from Ballinascarthy.

World Wide Sires, the world’s largest co-operative owned bovine semen company took the opportunity to launch their Irish entity at the show. World Wide Sires Holstein and Jersey genetic stock and impact bulls are already well-known to Irish dairy farmers. They now plan to have a direct sales channel in Ireland having hired ten sales staff to cover different geographic regions across the country. They will continue to promote their beef semen range through Norbreck.