A recent study has found no evidence in the belief that drinking milk should be avoided by people with a respiratory illness.

The study, carried out by Ian M Balfour-Lynn from the Department of Paediatric Respiratory Medicine, Royal Brompton Hospital, London, UK, noted that the texture of milk can, however, make some people feel their mucus and saliva is thicker and harder to swallow.

The research explains that this is because milk is an emulsion (defined as a suspension of droplets of one liquid in another) of fat in water. Emulsions mix with saliva leaving saliva feeling thicker when milk is consumed.

According to the researchers, this may explain why so many people think there is more mucus produced, when in fact, it is the particles of milk emulsion that they are aware of lingering in their mouth and throat.

The myth that it is bad for asthmatics is widely held. However, it turns out it is false belief, according to the research.

The conclusion of the study states that: “Milk is an important source of calories, calcium and vitamins for children. The milk–mucus myth needs to be rebutted firmly by healthcare workers.” A link to the findings of the study can be found here.

In other dairy research news, a trial conducted by Food for Health Ireland (FHI) scientists at University College Dublin (UCD) has found that, when Irish full-fat cheddar cheese was consumed by a group of individuals for six weeks, it did not raise blood cholesterol levels.

A total of 127 participants – all with elevated cholesterol levels – participated in the human intervention trial.

The individuals were divided into three groups, with each group consuming dairy fat in different forms throughout the six-week period.

The results were identified by comparing the findings of the three groups – which all consumed the same amount of fat.

According to the findings: ‘Group A’ had a significantly greater drop in total cholesterol compared to ‘Group C’. ‘Group B’s’ results fell in between the two groups. 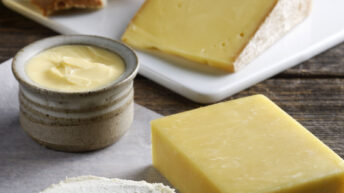