There has been a marginal increase in the herd incidence levels of bovine TB (bTB) recorded for the first six months of 2019 compared to the first half of 2018, according to the Department of Agriculture, Food and the Marine.

As of June 30, herd incidence for bTB stood at 3.10%, which is marginally higher on the 2.88% which was recorded for the same period last year, according to department figures.

This means that of all herds tested for bTB so far in 2019, 3.10% had at least one animal that tested positive for bTB.

The map below shows new restrictions in the three-month period from April to June, the second quarter of 2019. 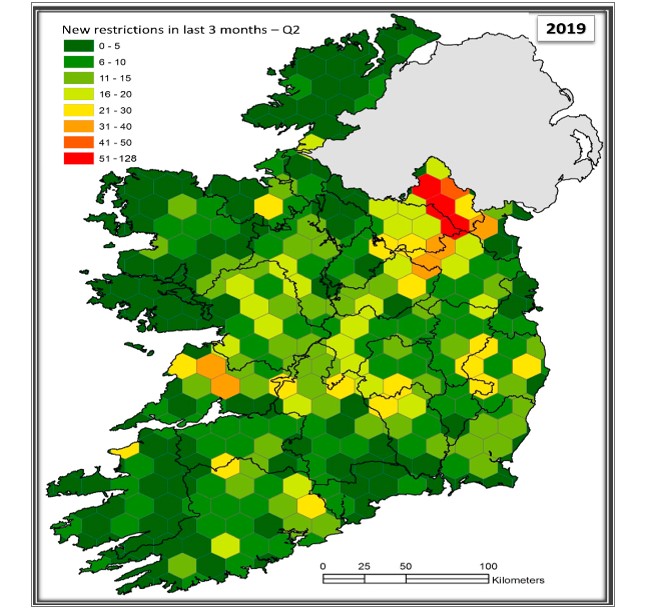 According to the department, some 58,010 of the herds in the country – 59% – have been tested at least once as of the end of June.

The number of herds restricted was 2,008 at the end of June. This is slightly higher when compared with 1,852 at the end of the second quarter of 2018, the department notes.

While this is to be welcomed, it is too early to draw any definitive conclusions on this reduction at this stage, the department has said.

The department also released a county breakdown of the incidence of TB for the first six months of the year. 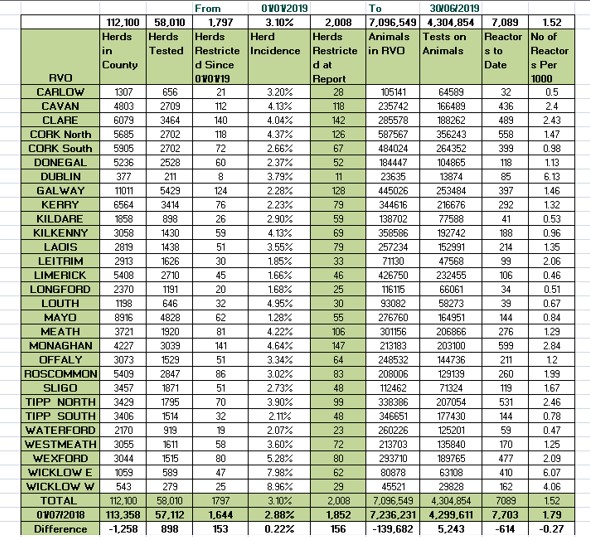 ‘Bovine TB: Clean It Out’

Meanwhile, a new communications strategy is being developed to provide information on the eradication of bTB to all stakeholders.

Leaflets are being produced which will detail different aspects of the bTB programme, including advice on how to protect your herd, explanations on the different tests used and other areas of interest.

A series of information videos are in production. The first in the series – “Bovine TB: Clean it Out” – has been released by the department.

Farmers are advised to watch this short video which is a simple guide on procedures to properly cleanse and disinfect sheds to help eradicate bTB.

If farmers have any queries in relation to cleansing and disinfection they should contact their Department of Agriculture regional veterinary office.