Map: Less than 50 farms make up 45% of Irish pig population

According to the latest pig survey completed by the Department of Agriculture, 45% of total pig production in Ireland is accounted for by just 47 farms.

According to the 2016 Pig Census, in October 2016 the average active Irish pig herd numbered 872 pigs. This increased from an average herd size of 776 pigs in the 2015 census.

These 47 herds account for over 45% of the overall pig population. There was a slight rise in the number of herds with over 10,000 pigs on 2015 (four additional herds).

Just 0.1% of the population, some 1,737 pigs, were recorded in 1,231 active herds which kept a maximum of 5 pigs. These herds, however, represented 67% of total active herd numbers.

The pig population in four counties exceeded 100,000. Cavan took the top spot from Cork in 2016, as the most pig populous county – representing about 18.5% of the total population. 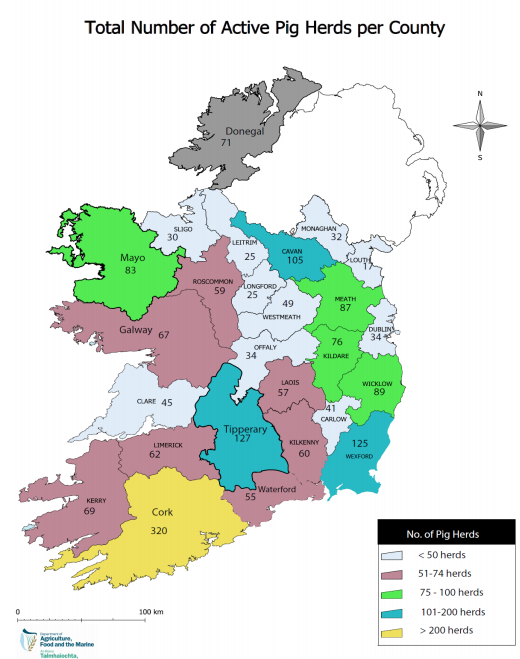 Cork had easily the most pig herds in the country, numbering 320 herds, which was over double the amount of the next highest counties in second and third place – Tipperary and Waterford respectively.

In terms of pig production, there were 557 pigs in Ireland which were kept for purposes other than entering the food-chain. This is a fall from 605 non-production pigs in 2015.

There were 3,157 registered pig keepers in Ireland in September 2016. However, of the 2,529 who responded to Department inquiries regarding current activity, 1,152 respondents (46%) declared that they had no pigs in October 2016.

Of these, 668 keepers declared that they had also not kept pigs in the 12 months prior to the census.

'Carving' out a business – and a better life – from pig farming