Macra na Feirme has elected James Healy as its National President today. He becomes the 36th person to hold the position in the organisation’s history.

Healy, from Kilmartin, Donoughmore, Co. Cork, amassed 91 votes out of a total valid poll of 151 to secure the position.

He is a founding member of the reformed Donoughmore club based in Muskerry, Co. Cork; a club which has gone on to win the ‘Macra na Feirme Club of the Year’ twice in the past.

The other candidate in the race, Odile Evans, had notched up the remaining 60 votes.

Counting of the votes got underway at 2pm at the Irish Farm Centre in Bluebell, Dublin 12.

Healy will take over from the outgoing National President, Sean Finan.

Finan, who presided over the election, congratulated both candidates for the campaigns they had run after the results were announced.

This was a great election, highlighting the best of Macra in terms of leadership, debate and enthusiasm.

“I look forward to the inauguration ceremony at the Macra na Feirme National AGM on May 6 in Drumshanbo, Co.Leitrim,” he said.

Speaking after the election, Healy said it was an honour to be elected as the next National President of Macra na Feirme.

“It was a hard fought campaign and I greatly enjoyed travelling around the country, meeting members and hearing their views about Macra na Feirme.

“The landscape of rural Ireland is changing greatly and I look forward to serving Macra na Feirme members and moving the organisation forward for what is sure to be a challenging couple of years, particularly with the impact of Brexit.

“I would also like to pass on my commiserations to Odile Evans who ran a great campaign,” Healy said.

Healy is the seventh Cork representative to be elected as the National President of the organisation and he believes joining Macra played an ‘influential part’ in shaping him as an individual.

Through my membership, I have gained so much from the opportunities provided and I want to make sure these and more opportunities will continue to be available for all members into the future.

“For this to happen we, the members, must work together as a team to allow Macra to grow and prosper.

“I firmly believe that my overall rounded experiences provide me with the key skills and attributes to serve as Macra President and to help ensure our team works to the best of its abilities for the betterment of Macra na Feirme,” he said.

Macra elects a National President and a National Council, made up of three regional Vice Presidents, every two years.

A National Executive is elected every year, made up of a National Chairperson, a National Treasurer and a National Secretary.

Odile Evans, who has held the role of Vice President and National Treasurer in the past, declared her intention to run for the National Presidency at a meeting in Co. Wicklow in early January.

A graduate of Food and Agribusiness Management from UCD, Evans grew up on a dairy farm and works as a journalist. 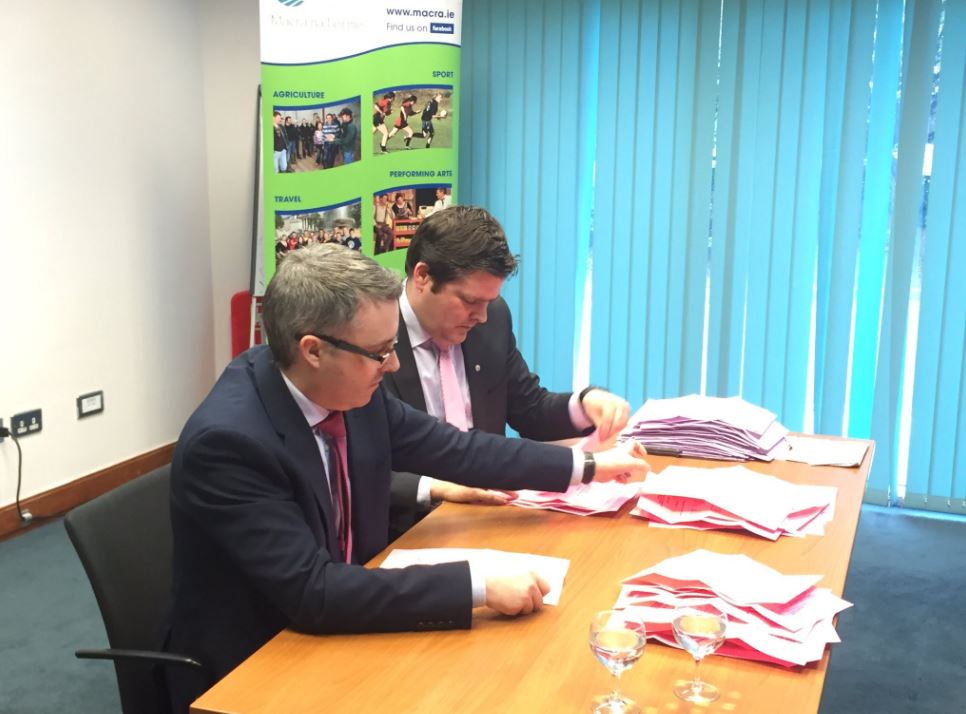 He is a current member of the National Council and has served as Munster Vice-President and National Competitions Chairperson in the past.

Hailing from a small holding in Co. Cork, Healy is employed as a production supervisor with an electronics company.

Both candidates had attended a number of hustings throughout the country in the weeks leading up to the count.

Some of the Vice Presidency roles were decided prior to the count; Cara O’Mahony, from Mountain View, Naas, Co. Kildare, succeeds Evans as the Leinster Vice President.

Meanwhile, Sharon Corcoran, from Rathkelly Close, Ballinrobe, Co. Mayo, has been elected as the North West Vice President for the next two years. Out of a total valid poll of 35, Sharon Corcoran received 19 votes; Brendan Curran, from Gorvagh, Mohill, Co. Leitrim received the remaining 16 votes.

Macra presidency to be handed over later today