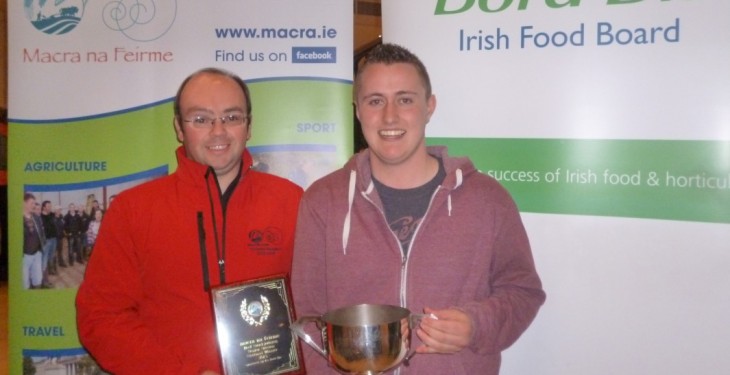 Seventy three young farmers took part in the competition as part of the Macra na Feirme Annual Conference in Carlow at the weekend. The competition final took place in Tullow Mart on Sunday.

Speaking of the win, Douglas, who is studying economics in UCD, said: “I thought I’d do okay, but didn’t think I’d win. The theory part is tough. And a good few people had studied ag science.

“I live on a farm so my dad used to take part when he was in Macra and he used to do well. I’d always be out helping him pick out sheep for sale. I’ve have had a few days to recover [from winning], and had to get into college. That settles you down pretty quickly!”

“It was brilliant,” McSweeney said. “It’s quite difficult because there was a high standard of animals and of competition. I’m doing ag science in Waterford and it’s something we’d be using a lot if we were going forward. I won the under-23 version a few years ago in Wicklow.”

As with Michael, Noel’s experience growing up in a farm, and spending time with his father was invaluable in the competition. “We have a herd of 60 sucklers at home. And we have a pedigree Charlie herd. I’d have learnt a lot from my father and we show cattle as well. That’s where I’d pick up a lot. We had a first prize winning calf in the Tullamore show. It showed me the standards of cattle and the attributes to look for.”

Top prize in the Under 23 category of Beef stockjudging went to John McSweeney (no relation to Noel) who is also from Tarelton Macra. Runner up in this category was Nigel Hogan from Tullow Macra, Co. Carlow.

Macra na Feirme National President, Kieran O’Dowd, speaking at the final said, “Well done to the winners and everyone who took part in this prestigious and skilled competition. The Bord Bia stockjudging competitions help young farmers become skilled at assessing livestock, and prepares them for the actual job of buying and selling animals, a crucial skill for any young farmer.”

Mark Zieg represented sponsors, Bord Bia, at the All-Ireland final. He said, “We were impressed with the high standard of stockmanship shown by this year’s competitors. Young farmers are in-tune with the requirements of our beef and lamb markets, in terms of age, weight, fat cover and conformation. This knowledge is of key importance nowadays, in selecting animals for sale or for breeding.”

First place winners in each category have now won themselves a place on the Macra na Feirme prize-winners trip abroad next year.