The rocky road through Burren 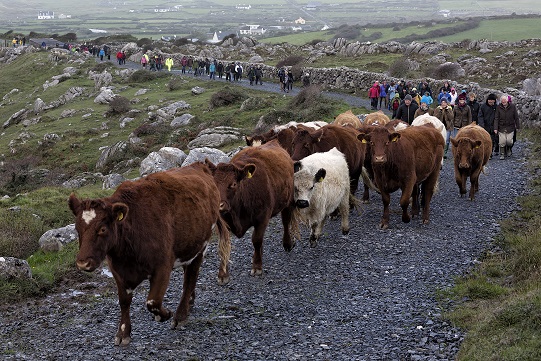 The Burren, home to last weekend’s Winterage Weekend, has always been an immovable, rugged facet of Irish culture. Its inspiring landscape is the subject of much poetry, literature and progressive ideas.

Depending on where in the Burren you’re walking, the land under your feet can look and feel like springy moss, lush grass or the rocky, barren surface of the moon.

Last weekend marked the end of the summer, as local farmers continued the tradition of bringing their cows to winter pastures in the Burren’s limestone uplands. This tradition is called Winterage and the Burren is one of the only known places in the world where it takes place. To mark the occasion, the Burren Winterage Weekend which took place last week, had guided pilgrimages across the region in the footsteps of herdsmen, images, stories, discussion, an open farm, a food fayre and craft demonstrations, all culminating with the winterage cattle drive.

Brigid Barry, trust-co-ordinator, Burrenbeo Trust told Agriand that they were “delighted at how it went.”

“All the events were well attended,” she says. “This weekend is about celebrating the tradition and heritage and people enjoyed being part of it.”

“There were a lot of families, people from the local community, and many people came into the area for the event.”

Brigid says that numbers have grown since the inaugural event last year. “Word has spread so there was a lot of support this year. Most of the events were free. People gave their time and everyone got really involved.”

The focal point of the event was the cattle drive. “Getting to the top of the valley and looking back down over the Winterage, going through that motion was amazing, The cattle are going up there whether we’re here or not. They’re going there until April.  This really cemented for me the events significance to celebrating our farming hertiage.”

The cattle have been travelling uphill every winter for hundreds of years. Is it inherited muscle memory, like when birds fly south? “It is what they do,” says Brigid. “They move into hills for winter. The cows that are older had been there before and younger ones follow them. It’s amazing to do this with farmers – they have to go up twice a week anyway and it was a great insight into this age-old tradition. It’s incredible – this is a different kind of farming than what is in other parts of Ireland. They’re up in the hills checking on them, looking for new-born calves sometimes.”

For Brigid, the local farmers were the stars of the weekend. “Farmers like Patrick McCormack, the Casey brothers, John Burke and PJ O’Donohue are so connected to the landscape and in tune with it, for them to be able to express that [experience] to an audience, is really special.  To me it was the local farmers who were incredibly special in making this event happen.”

The weather over this weekend could generously be described as erratic, but organisers didn’t make drastic changes to make it a more indoors event. “I didn’t think I had to make a change,” says Brigid, “I just thought numbers would be low. When 250 turned up I was aghast. People really enjoyed it. There was a break in the weather and people were just very in tune with why they were there, and the beautiful scenery. Winterage is crucial to the landscape of the Burren, it produces an amazing byproduct of biodiversity and ecology. This cattle drive was walk back in time looking at a poitin still, and a deserted village, and a Bronze Age ring fort, and the generations of farmers that have driven their cattle into the hills beforehand.