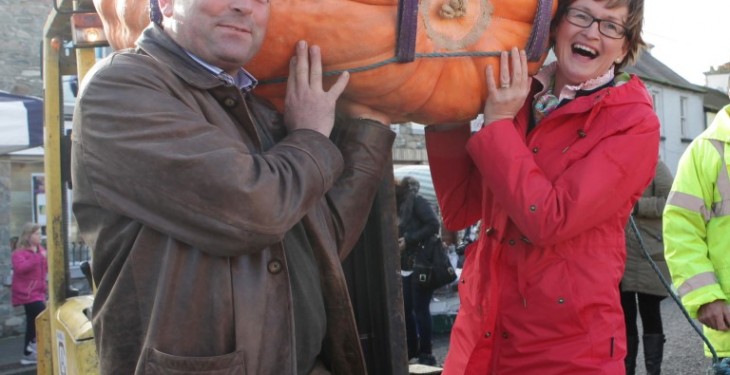 15,000 attendants, including families, farmers, dancers, actors, joined some very big seasonal vegetables at the Virginia Pumpkin Festival in Cavan over this past week.

Margaret McKeon-Boyle, public relations officer for the event, told Agriland: “It’s a community festival. It’s unique in that it’s about the pumpkin and it’s the only festival in Ireland and maybe including England about it. The main element is a competition for giant pumpkins that can weigh over 80 stone. Most of the Irish growers get it up to 60 stone in weight.”

“On Friday we had the haunted forest walk, in a nice spooky area called Deerpark Woods, 2,000 people went through it on Friday night. Actors were there to frighten the life out of people!

“Overall attendance was up, estimated at 15,000 for the weekend. Sunday alone for the parade attracted over 6,000 people. On Sunday it’s a festival parade and fireworks. The town closed down traffic at 12 and opened for the fest. It was like Mardi Gras; with entertainers, pumpkin carvings, and giant pumpkin weigh in.”

“The objective is to encourage pumpkin growing in Ireland. The event used to be more international, possibly to the detriment of local growers. The local focuss worked because we got much more entries than in previous years.”

The festival put together by a voluntary group, with any money raised going back into the event.

According to Phelim McCabe, chairman of the organising committee, “Thousands of festival goes descended on Virginia over the bank holiday weekend to soak up the atmosphere and enjoy the many events and activities we had planned.  The dry weather on Sunday encouraged a greater number than last year onto the streets.”

Cavan Pumpkin Grower Gerard MacSein from Cornafein, for the second year, scooped the first prize in the Giant Pumpkin Weigh-off at the festival with his prize pumpkin weighing in at 680lbs (over 48½ stone).  He beat his own record from last year when he won with a pumpkin weighing 598lbs (over 42½ stones).  The competition is sponsored by Michael Mooney of Carnaross Sand and Gravel.

“The value to Gerard or anyone who wins would be that they’d sell the seeds of the pumpkin,” says Margaret. “Other growers would want seeds and they’d sell them to growers.

“There was a special needs school in Carlow – St Lesariana – and for the first time ever they grew a pumpkin and they won Prettiest Pumpkin. The kids planted it and it grew in three months. The caretaker [pictured with Mairead McGuinness] said it took 3 months. It takes a lot of tending in terms of watering.”

The Festival also plays host to the nation’s largest fancy dress party. On Sunday night Virginia turned into a Fancy Dress Town with over 2,000 revellers dancing in the Pumpkin Dome and a further 2,000 plus on the streets and in the pubs of Virginia – all in fancy dress.

On Wednesday night the six-day festival concludes with a theatre night in the Ramor Theatre.  Mullagh based  Millrace Drama Group who are  All-Ireland Drama Winners will perform their critically acclaimed Trad, a play that summarises satirizes, celebrates and eulogizes the past century or more of Irish drama.