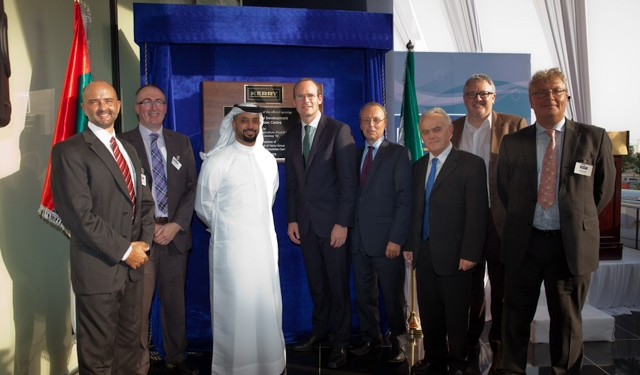 “The Irish food and drink industry seeks to grow exports to €12 billion by 2020” said Minister Coveney who is on a trade mission to the Middle East. Bord Bia announced the target this week as almost 60 representatives from the industry left for the region.

According to Bord Bia the Irish food and drink industry is set to double exports to the Middle East, to exceed €500 million by 2020.

Speaking of the Trade Mission, Coveney said: “The Middle East is set to become an increasingly important export market. Ireland’s long tradition of food production has allowed it to develop expertise the areas of food quality and safety, food research, product development and production engineering. There is considerable scope for further commercial development in this area, however, and I hope that by connecting the right people and developing the right commercial relationships, we can facilitate further fruitful engagement between Irish and UAE companies in these areas”.

Bord Bia Chairman Michael Carey added “In 2012, Ireland’s exports to the Gulf States were dominated by dairy and dairy ingredients (€168.3m), followed by prepared foods (€14.3m) and beverages (€8.3m). Market dynamics including strong GDP growth, increased consumer spending power, the process of urbanization, combined with demographic trends such as population growth, continue to create an environment which stimulates new business opportunities.”
Bord Bia also say that it is estimated that as much as 80-90 per cent of food consumed in the Gulf region is imported. The Economist Intelligence Unit (EIU) forecast that food imports by Gulf States will reach US$53.1bn by 2020, double the value in 2010 (US$25.8bn).

According to Aidan Cotter, Chief Executive, Bord Bia “Population growth has played, and will continue to play, a significant role in the surge in demand for food and food imports. At the turn of the century there were 28.5m people living in the Gulf region. By 2010 this had increased to 44.5m people, a 56% increase in population in one decade and by 2020, it is forecast the population will exceed 50m people. Despite successes in developing domestic food production capabilities, the market will remain largely reliant on importing food to meet the growing demands of consumers.”

Bord Bia suggest that there will be further opportunities for growth in exports to the Middle East as access to markets for Irish Beef and sheepmeat in the region increases. The GCC earlier this year decided to formally lift bans on exports of Irish beef and sheepmeat to the region.

Aidan Cotter added: “The combined elements of economic growth, population growth, changing dietary habits and increased demand for food, in an environment with significant limitations on food production, ensure that food security is a key strategic and policy concern for Gulf States. Our focus this week will be to position Ireland as a sustainable supply solution to current and potential customers.”

Bord Bia say that they will participate at Gulfood, the world’s biggest annual food and hospitality show taking place in Dubai next February. They say the Ireland stand at the event will include dairy, meat and consumer food companies and hope it will be a significant and timely representation of the Irish industry following this week’s Trade Mission. Gulfood is expected to attract over 77,000 food buyers from around the world.