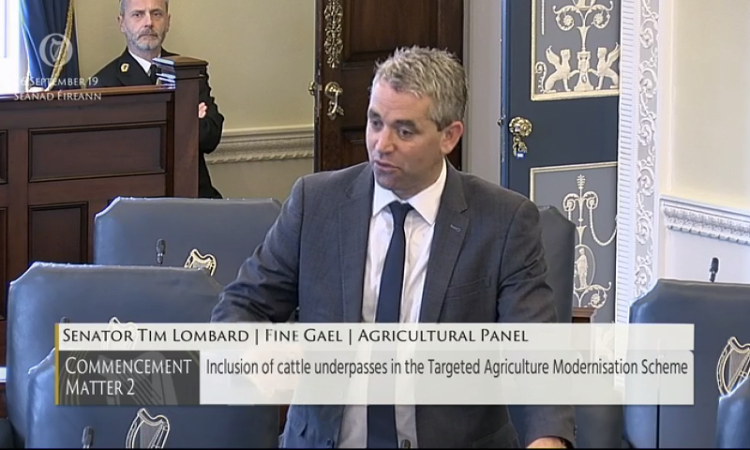 Fine Gael senator Tim Lombard as been appointed the party’s spokesperson on agriculture, food and the marine in the Seanad.

Taking to Twitter to confirm his appointment, Lombard said: “I have been appointed the Fine Gael spokesperson on agriculture, food and the marine in the Seanad by Tánaiste Leo Varadkar.

“I’m looking forward to working with Minister Martin Heydon [Minister of state for research and development, farm safety and new market development] and the Department of Agriculture, Food and the Marine in this new role,” Lombard added.

I have been appointed the Fine Gael Spokesperson on Agriculture Food and the Marine in the Seanad, by Tánaiste @LeoVaradkar. I’m looking forward to working with Minister @martinheydonfg and @agriculture_ie in this new role. pic.twitter.com/f0zMlBkMd1

He was previously the Fine Gael Seanad spokesperson on communications, climate action and the environment, and ran in the 2020 general election, finishing with the fourth-highest number of votes in the thee-seat constituency.

In other agri-politics related news, Minister for Agriculture, Food and the Marine Barry Cowen has said that he will be instructing his lawyers to “take all necessary steps to vindicate my good name and data protection rights”.

The minister made the comment yesterday, Sunday, June 12, after an article in The Sunday Times referred to a Garda record which indicated the minister attempted to evade a checkpoint.

Minister Cowen has strongly disputed the accuracy of the record, saying: “The Sunday Times has today [Sunday, July 12] published an article referring to an incorrect Garda record dealing with the incident which occurred on September 18, 2016, despite the fact that my solicitors wrote to the newspaper in advance of publication.

“I did not evade, or attempt to evade, a Garda. Such an act would constitute a serious criminal offence and I was not charged with such an offence,” the minster insisted.