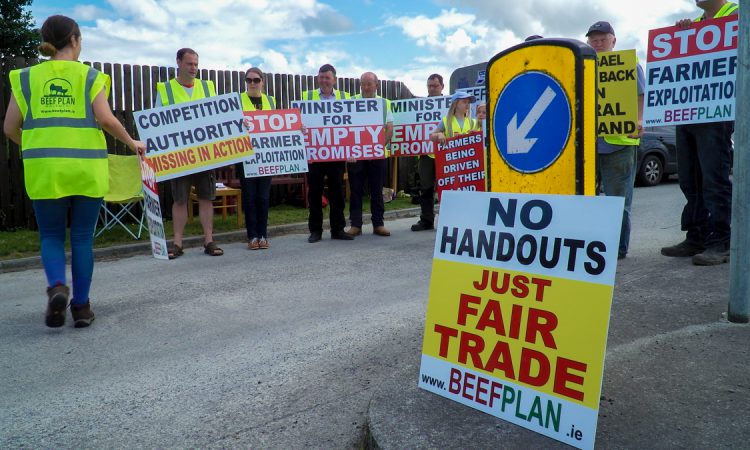 The Beef Plan Movement has reiterated the call for its members to refrain from protesting at beef processor gates around the country.

Speaking to AgriLand, Eoin Donnelly outlined that the threat of a legal injunction remains over the group saying “it is only suspended not withdrawn”.

He noted that this needs to be addressed and claimed “it was the Minister for Agriculture, Food and the Marine, Michael Creed, that allowed it to be suspended and not withdrawn”.

Donnelly explained that during the beef talks that concluded in the early hours of Wednesday morning, Meat Industry Ireland (MII) “proposed temporarily suspending the legal action”.

“While it appears in writing to be equivalent, it’s far from that because once protests were suspended, language such as withdraw protests and withdraw legal proceedings should have been used.

“This is because suspending a protest is effectively withdrawing it”.

The Beef Plan has contacted MII asking them to confirm that the legal proceedings have been withdrawn.

Donnelly added that the Beef Plan has participated in the talks and they have now concluded.

He said the Beef Plan has not resumed its protest in line with the agreement that was made with Minister Creed.

Concluding Donnelly asked: Is MII going to hold their threat of legal action over the Beef Plan indefinitely or what is the end point for that?