Lack of discussion between Kerry and co-op ‘causing frustration’

Kerry Co-op has claimed that there has been “no discussion” between Kerry Group and the co-op since the results of an arbitrators report were released on September 6 last.

The co-op released a statement following a meeting of its Leading Milk Price Committee today, Wednesday, October 30. Also today, a protest has begun at the group’s offices in Tralee over the issue of milk prices stretching back to 2015.

The committee said that it “acknowledges the frustration this delay is causing for milk suppliers”.

The committee looks forward to engagement with Kerry Group without delay.

The arbitrators report, and today’s protest, relate to a milk price contract dating from 2013.

One farmer at the picket, speaking to Radio Kerry, said: “Farmers on the ground are getting very, very angry.

“People are getting very angry, because anyone who’s owed money, and who contends they’re owed money for 2015, it’s not only 2015. We had a contract; we got a commitment of a leading milk price back in early 2013. That contract lasted until 2025,” the farmer added.

Around 20 farmers are thought to be on the scene at the protest.

A spokesperson for Kerry Group has previously said that the group has been engaging with the co-op on this issue.

The spokesperson added that the company is reviewing the calculation of the milk price for 2015 under the contract in question, but that this review has so far indicated that there is “no adjustment required” to the 2015 price. 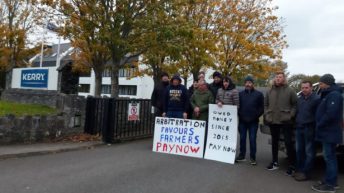