Krone updates its tedder line up 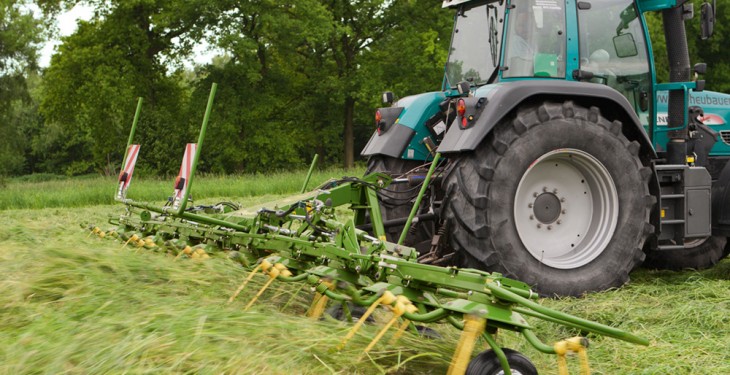 Krone recently unveiled two new arrivals to its tedder range, one which it says is the largest mounted rotary tedder currently on the market.

According to Krone, the 10.95m and 10-rotor machine is a response to the trend towards higher-powered tractors and efforts to optimise efficiency. It says the machine’s 1.53m diameter rotors with six tine arms guarantee excellent and absolutely uniform spread patterns.

The new KW 11.22 tedder uses Octo-Link clutches, which Krone says have proven its worth thousands of times in fields around the world. It says a large-diameter, eight-finger clutch is maintenance-free and provides frictional connection dependably in any position.

Krone also says the new machine offers a hydraulic border spreading system as standard. It says the system controls the rotor wheels and hence the tedder, which then throws the material away from the border of the field and spreads it in a uniform pattern.

The larger KWT 1600 models offer a 15.25m work width for maximum efficiency and come with a separate running gear for convenient road travel, according to the manufactures. It says the 14 rotors use the well-proven Krone design which is marked by a 1.53m diameter rotor, six tine arms and tines of different lengths (combing effect) and delivers a uniform spread pattern.

Krone says due to the fact the inner tines being shorter than the outer ones, none of the tines touches the ground which cuts out the risk of forage contamination and hence improving the quality of the forage.

Krone claims despite its large work with the KWT1600 tracks perfectly behind the tractor. It says this is due to an innovative Krone steering system. During road transport or in headland turn position, the system keeps the machine perfectly in line behind the tractor, giving the combination maximum manoeuvrability. In work position, the steering system for the overall running gear automatically switches to the individual rotor bogies, shifting the machine’s pivot point to the rotors.

Rotor height is set manually on the KWT 1600 and folding the rotors into work and transport position is sequence-controlled and automatic. Krone claim controlling the entire machine takes merely two double-acting couplers. It says the three-point headstock is equipped with a spring that prevents negative tongue loads on the tractor when the machine is in headland position as well as stability during headland turns.