Last week, a Co. Roscommon farmer and his wife avoided bankruptcy and the loss of their farm after a landmark ruling in the Circuit Court, having availed of the “one hope” that farmers have for dealing with creditors, without having to sell their land.

The court ruled that the couple could restructure their debts, through personal insolvency arrangements (PIAs).

Judge Mary Enright approved PIAs that will restructure their debt of over €500,000, giving them 20 years to repay it.

The PIAs were devised by personal insolvency practitioner Gary Digney of PKF-FPM Accountants Ltd, Balbriggan, through “utilising a complex piece of legislation”.

“It’s effectively using the Personal Insolvency Act 2012 to overturn unreasonable refusals and effectively have the proposal approved by court despite the rejection,” Digney told AgriLand.

“It’s a complex piece of legislation, but it has the ability to save farms, particularly from investment funds,” Digney said.

‘The one hope for many’

According to Digney, Ireland is the only country where something like this can be agreed for the payment of farm debt.

“Essentially, what’s happening in the farming community is loans largely have been sold to investment funds. The mainstream banks have sold the loans on to these American investment funds and these funds have taken over ownership of the loan,” Digney explained.

“Investment funds have short-term strategies in terms of recovering debt that they have purchased.

All the strategies they have, invariably, seek to sell the land as quickly as possible.

Digney said that historically, mainly due to being unable to reach a decision-maker and unreasonable refusals of proposals, farm bodies and advisors have been trying “unsuccessfully” to find a solution and the reality is that the “only way in Irish law of forcing a deal on an investment fund is through a PIA”, describing it as the “one hope” for many.

“It’s a fantastic solution, but quite often the only solution that exists. It won’t suit every single farm, but it will suit a large number of them. It is the one hope for many.”

The legislation is “relatively new” and was brought in for people with negative equity in their homes. “We’ve utilised the legislation to address farm debt,” Digney said.

The bank will get paid, just over a longer period of time – [as] opposed to the farm being sold and lost.

According to Digney, how a PIA works is that a qualified personal insolvency practitioner will review the situation and see if the farm debt is workable, look at how far farmers are down the repossession route and then apply to court for a moratorium.

“I can apply to the court on behalf of the debtor and can get a moratorium, which protects the farmer for 70 days, to allow a proposal to be put forward. What the moratorium essentially does is give breathing space for me to assess the farm and put a proposal forward to repay the debt – restructuring.”

What this rearrangement does is “resize the farm debt to a sustainable basis”. It allows the farmer time to repay debt. “There may be a write-down or there may not,” according to Digney. “It depends on the value of a farmer’s assets and his ability to repay the debt.

“If I am able to make out that a farmer is able to repay debt over 20 years and an investment fund says ‘no’, I’m rejecting that – if the farmer meets the criteria, an application to court can be made to have the judge to review the proposal.

“The alternative is that the farm is sold or bankruptcy petitions are issued, which is happening regularly. That’s not a solution.

“The PIAs are a legally-binding solution. We’re saving farms by utilising the act.”

‘Farmers stick their heads in the sand’

By saving farms, farmers are also being saved.

“Quite often, the mental health of people in debt deteriorates. It doesn’t help when they can often feel like there is no option other than giving in,” Digney said.

“One of the unfortunate things for farmers is that they are receiving poor or wrong advice – or that the advice comes too late.

Farmers are very reluctant when it comes to this stuff – they leave everything to the end. They stick their head in the sand and they get advice from people who do not understand or are aware of the existing legislation. That’s the reality.

“The key to the whole thing is early intervention and ensuring that the farmer is advised by a suitably qualified personal insolvency practitioner.

“We are going to see more of these cases and quite often the only solution to save the farm will be a PIA.”

‘It’s time to stand up to these vulture funds’

Nigel Renaghan, Ulster and north Leinster chairman of the Irish Farmers’ Association, said that he has seen farmers get into financial trouble through the years and that they have been “limited with options on what could be done”.

“What happens to farmers doesn’t even seem believable,” Renaghan said.

“Telling farmers about the option of PIAs is important – I can’t stand back as somebody who is representing farmers and not speak up and try and get the message out there.

Debt has wrecked and destroyed marriages. There are farmers struggling to cope; farmers in very, very dark places over the stress of debt and feel like they have no option.

“In these situations, many people are of no use. There’s a difference between creating noise and creating a solution.

“It’s time to stand up to these vulture funds.” 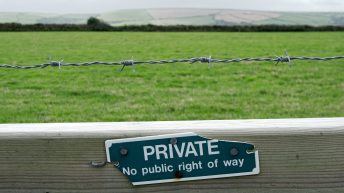 Illegal hunting and lurching a ‘major concern’ to farmers