The Irish sheep sector got off to a promising start this year, with favourable lambing conditions and excellent grass growth throughout the spring and summer months, Declan Fennell of Bord Bia has said.

By all accounts the 2015 lamb crop is reaching new highs, he said in terms of throughputs and prices.

According to the Department of Agriculture, supplies at sheep export meat plants for the week ending August 23 stood at 62,064 head, up 5% on the corresponding week in 2014.

Supplies for the year to date stand at 1.5m head, and according to Fennell it is not since 2007 that throughput levels surpassed this threshold point.

Prices too have performed consistently well throughout the season, despite a challenging market where retail sales have been subdued in our main export markets, he said.

A significant part of this price gain was achieved during hogget season, he said, when average prices reached €5.26/kg up 35c/kg on the previous year.

When compared to 2011, which was regarded as a particularly good year for Irish sheep sector, 2015 is reaching new highs, Fennell said.

As we head towards the peak season of lamb production, weekly throughput levels will pick up in numbers and this he said may have some downward pressure on prices.

It remains to be seen how the 2015 UK lamb crop, which has reached a seven-year high up 6% on last year, will have an impact in our main export markets, though the strength of the Sterling against the euro continues to erode the competitiveness of UK exports, Fennell said. 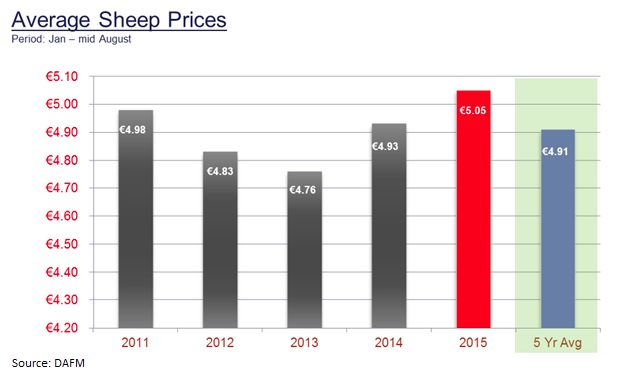