Irish gardens “ready to bloom” on breakfast television in Canada 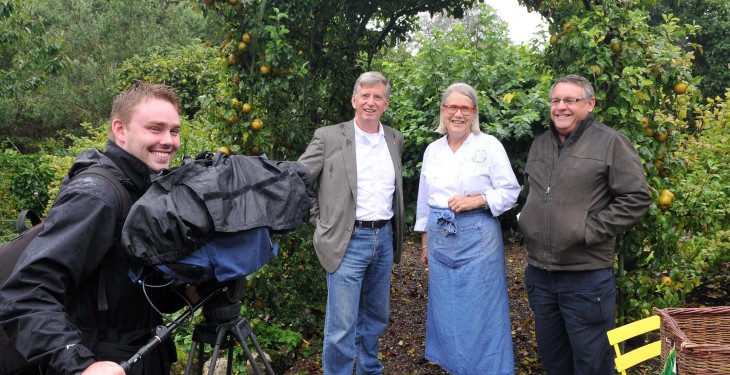 A crew from Canada’s favourite breakfast television show, Canada AM, is in Ireland this week, to capture footage of top gardens in Dublin, Wicklow and Cork.

Two of Canada’s best-known celebrity gardeners, Mark Cullen and Denis Flanagan, were invited here by Tourism Ireland in Toronto – to record segments for Canada AM and to research some of our wonderful gardens for articles they are writing for the Toronto Star newspaper and Landscape Ontario magazine, as well as for Canadablooms.com.

Their action-packed itinerary included interviews with Helen Dillon at the Dillon Garden in Ranelagh, Dublin; and with Darina Allen at Ballymaloe Cookery School in Co Cork. They filmed at Powerscourt House and Gardens and at Mount Usher in Co Wicklow; and also visited Fota House, Arboretum and Gardens, Charles Fort in Kinsale, Glebe Gardens in Baltimore, Bantry House and Gardens and Garnish Island. They played golf in Killarney, on the Mahony’s Point course; and at the K Club, on the Palmer course.

Jayne Shackleford, Tourism Ireland Canada, said: “We are absolutely delighted that Canada AM agreed to film in Ireland. It’s a tremendous opportunity to showcase some of the very best of what we have to offer to a huge Canadian audience. Canada AM is the most popular morning TV show here in Canada and the segments filmed in Cork will be seen by an estimated 1.4 million viewers.”

Tourism Ireland undertakes a busy publicity programme around the world each year to raise the profile of the destination – and media visits to Ireland are a key element of that programme. In 2012, there were more than 1,400 media visits to the island of Ireland, which helped to generate articles and broadcasts around the globe worth about €50m in equivalent advertising value.

Pictured Cameraman Jason O’Reilly films well-known Canadian gardeners Mark Cullen (second left) and Denis Flanagan, as they interview Darina Allen, at Ballymaloe Cookery School, for Canada AM. They were invited her by Tourism Ireland in Toronto.