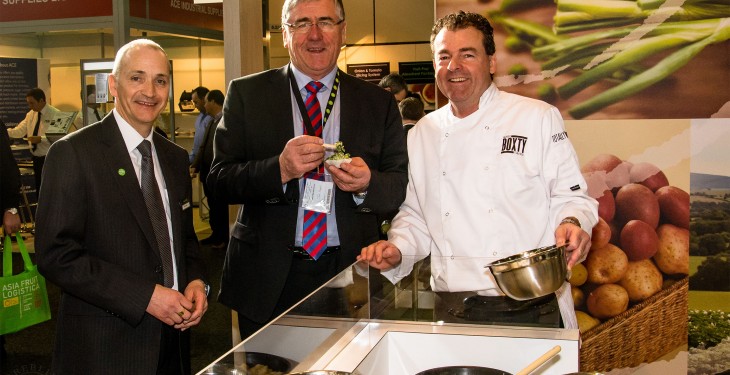 The performance of Bord Bia and its partner the Irish Potato Federation at an international fresh fruit and vegetable trade fair in Berlin were commended by Minister of State Tom Hayes this afternoon.

Fruit Logistica is held in early February each year in Germany and it is attended by more than 2,500 companies from around the world. In 2013, it attracted 58,000 visitors from 130 countries.

This is the third year Bord Bia has had a stand at Fruit Logistica, which is recognised as a significant international meeting place for all aspects of the fresh fruit and vegetable industry.

Minister Hayes congratulated Bord Bia and the participating Irish companies on their foresight and enterprise in availing of this opportunity to seek out new markets for that most traditional of Irish crops, the potato.

”I know that Bord Bia has done its homework on this; It has already made contact with key buyers in advance of the show, and have invited both importers and retailers from countries such as Russia, Poland, Romania, Czech Republic, Slovakia, Slovenia, Hungary and Bulgaria to visit the Ireland stand.

He added: “These buyers can also visit the www.potato.ie website and get information in English, French, German and Russian. I wish the partners, Bord Bia and the Irish Potato Federation, every success in their mission to bring quality Irish-grown potatoes to consumers across Europe.”