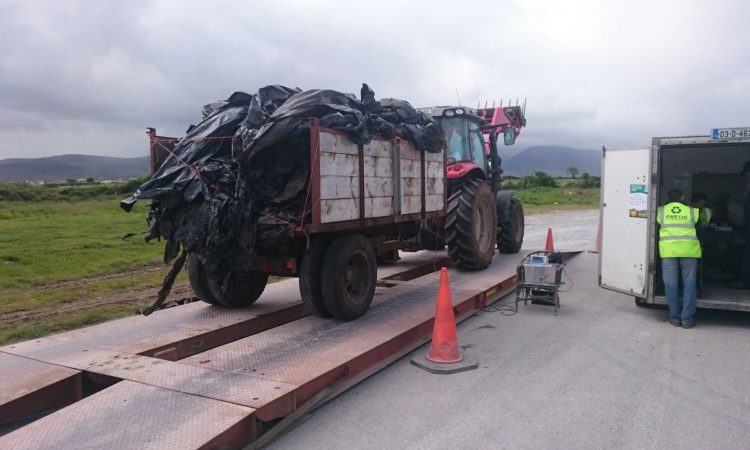 This amounted to over 29,000t of silage wrap and pit cover waste being recycled and a 75% recycling rate achieved.

In addition, 1,000t of netting and 1,000t of fertiliser bags and agri-drums were also recycled, which resulted in a total of 31,000 tonnes recycled for the year.

This figure matched what was achieved in 2018, which was “a record year” for farm plastics recycling in Ireland, according to IFFPG.

IFFPG, the national farm plastics recycling scheme, collected over 90% of this material at 235 bring-centres during the period April to July, with the remainder collected at farmyards.

The average bring-centre saw 111t of waste delivered by farmers, which is the equivalent to plastic wrap from approximately 55,000 bales.

Advertisement
Listowel bring-centre was the best performing bring-centre in terms of volume with 421t collected, while Ballinarobe bring-centre recorded the highest number of farmers with 658 farmers availing of the service.

The collected material is sent for recycling to a range of Irish and European recycling facilities, primarily for conversion into new products such as refuse sacks, construction film and piping.

According to IFFPG, the decision by the Chinese to cease importing plastic waste in 2018 negatively impacted on farm plastics recycling in Ireland as it reduced demand from European recyclers and saw gate fees reintroduced.

IFFPG’s manager Liam Moloney said: “This left the scheme with no choice but to increase producer and farmer charges in 2019 and this measure, combined with the sourcing of new recycling outlets, will ensure that all collected material is recycled.”

IFFPG will begin providing a bring-centre service again in April, with a farmyard collection service available all year round.