COMMENT: As livestock farmers start to purchase fertilisers over the coming weeks, it is worth asking the timely question: Are Irish farmers paying too much for fertilisers?

Even though the prices they are being paid for their goods has increase in recent years, so too has the cost of production. This is evident in the case of fertiliser costs. Looking at the latest Teagasc profit monitor data for both Livestock and Dairy farmers. Fertiliser costs have a major impact on the costs of production:

The timing of this discussion is apt. Farmers are being informed of possible price increases in February. The argument being put forward is that global fertiliser prices are showing signs of upward increases. This fact is true. However, UREA posted a four-year price low in September.  The graph below shows the FOB** Price of Urea for some of the key exporting regions compared with Irish retail prices and Italian retail prices. There are clear downward trends over the past year on all prices except those in Ireland. 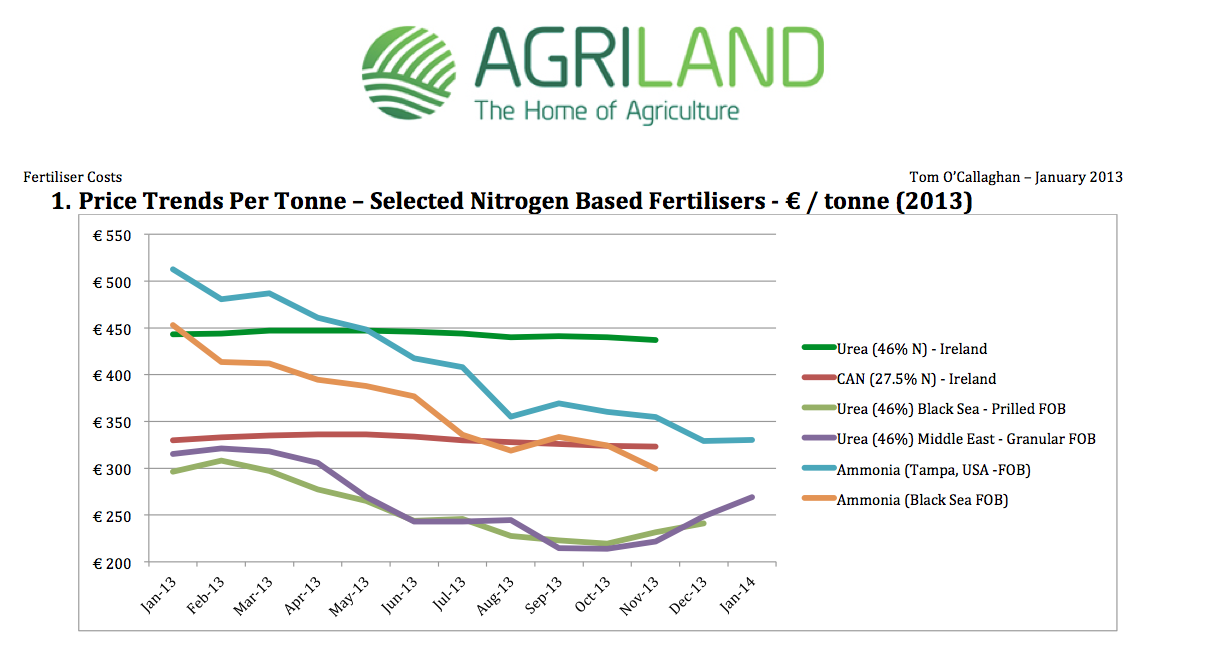 Nitrogen is the key component in many fertilisers. Both Urea and Calcium Ammonium Nitrate (CAN) are derived from reactions involving Ammonia. Ammonia contains 82% nitrogen, UREA 46%, and 27.5 CAN contains 27.5% nitrogen. Keeping in mind this information, the price differences for these products become even more striking when you break down the values of these key fertilisers in to cents (euro) per kg of nitrogen.

The Irish farming unions show great initiative to lobby for better prices and returns from Retailers and Processors. Perhaps some of this effort should focus on help drive down inputs costs also!

**FOB: Free on Board, this means that the seller / trader pays transport and insurance  up to the ship in the port. The buyer pays for the freight. Recent quotes would suggest that the shipping / freight costs for European and UK clients is in the region of U$20 – $40 per tonne, and duties / taxes adding an extra $20+ per tonne.