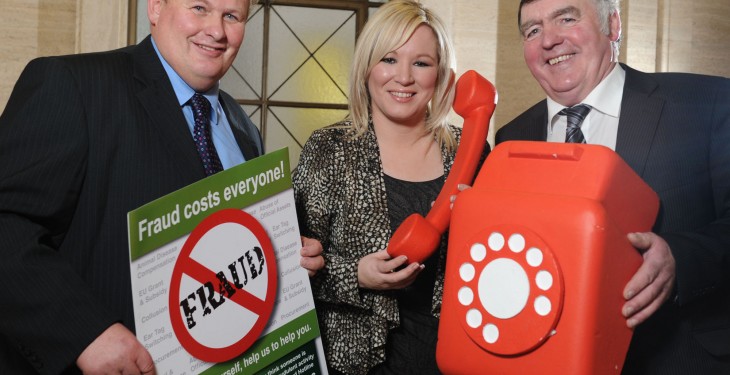 Raising awareness of the hotline number Minister O’Neill said: “Current levels of fraud against the department are low, however, with introduction of the new Common Agricultural Policy Reform in 2014, I am committed to ensuring that the opportunity for fraud in all areas remains at the lowest possible risk.

“A key element of our strategic approach to tackling this issue is focused on developing a culture of anti-fraud consciousness across the farming and rural communities and also within the department. The Fraud Hotline facility is one of the mechanisms that we will use to counter fraud effectively. We are focused on changing attitudes and mindsets towards fraud.”

Welcoming the support of the Ulster Farmers Union and the Northern Ireland Agricultural Producers Association Minister O’Neill said: “If our efforts to counter fraud are to be successful we will need the full support and co-operation of everyone involved in the business. Industry support is a clear indication of the joined-up desire to raise awareness of and counter fraud.”

The minister concluded: “I would encourage anyone that has concerns around fraudulent activity to use the Fraud Hotline. The facility is available 24/7, confidential and all information will be treated in the strictest confidence.”

UFU President Harry Sinclair said: “The vast majority of farmers in Northern Ireland are honest, hard working people who wouldn’t dream of getting involved in fraudulent activity. Unfortunately, there is a small minority who might consider jeopardising our industry’s reputation which is why it is helpful that DARD has an anti-fraud hotline for anonymously reporting incidences.”

Chairman of NIAPA Sean Fitzpatrick added: “As a farming representative organisation, NIAPA would support all measures taken to eradicate fraud. While there is no evidence of wholesale fraudulent practice in agriculture it only takes a few cases to blemish the industry. Those who may participate in such actions have no respect for all other hardworking farmers many of whom are having bother making ends meet.”

Originally launched in January 2001, the Fraud Hotline was used extensively during the Foot and Mouth Disease crisis, to encourage members of the public, farming community and others to let the Department know in confidence about suspected cases of fraud or irregularity. There have been two previous campaigns in September 2002 and December 2004.