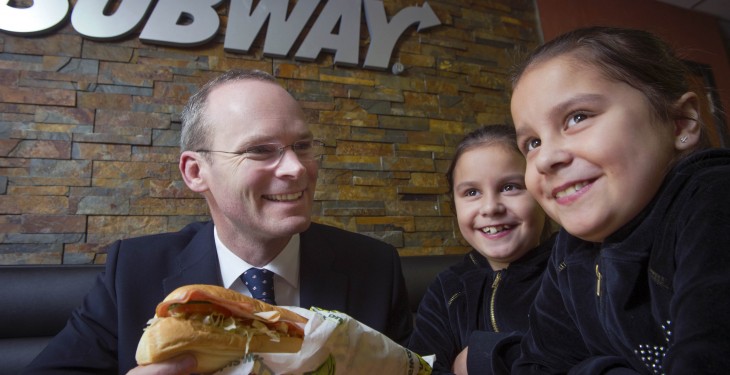 Restaurant chain Subway has this morning set out ambitious plans to increase the number of its stores in Ireland by more than 180 over the next six years, creating more up to 1,800 new jobs. This follows recent store openings and the total store count is 117 with 16 new store openings in 2013.

It says the expansion plans are in response to growing consumer demand for affordable, healthier choices, which are made to order and extended opening hours that will cater for the growing breakfast to-go market.

The 1,700th Subway store in the UK and Ireland recently opened in Douglas, Co Cork and Subway has plans for a further 40 stores in Ireland in 2014 alone.

It says the store openings planned by the Subway development team this year will create up to 400 new jobs and represent an investment of almost €5m.

Speaking on the announcement, Mike Charest, assistant regional director for Europe said: “The UK and Irish markets have been fantastic success stories for the Subway brand and we see opportunities for further growth as more and more consumers demand great tasting food at a value price-point. The introduction of a varied breakfast menu and longer opening hours have been instrumental in increasing store footfall.

“In addition to our traditional store development we see new potential in settings such as universities, stations, convenience stores, hospitals, airports and petrol stations.”

Muriel O’Grady, representing Subway in Ireland, said: “We are a strong team of independent entrepreneurs working collectively to grow our business by providing excellent food, service and value.  As well as the service we provide to customers we are also supporting the economy wherever we can and in the past year alone the Subway brand used more than 400,000 beef patties produced in Ireland and using 100 per cent Irish beef sourced from certified quality assured farms.  It’s something we are immensely proud of and ensures that we serve the communities in Ireland in more ways than one.”

Pictured: Agriculture Minister Simon Coveney with twin sisters Ava and Page Wren from Douglas in Subway Douglas, Cork to open the 1700th Subway store in Ireland and the UK