Irish charity, Bothar, has sent 300 in-calf heifers and 220 goats to Rwanda, Kosovo, Albania and Romania, so far this year.

The charity works with families and communities worldwide to overcome hunger and poverty; and to restore the environment in a sustainable way.

“When you think of the multiplier effect with the in-calf heifers alone; you are talking multiples of the 300 families who received an animal this year being lifted from a daily struggle for survival,” said a Bothar spokesperson.

“We go back every year to inseminate the heifer. The arrangement struck with the recipient family is that the firstborn female calf must be passed onto another family. It’s a cycle that continues from family to family so it’s truly the gift that keeps on giving,” said the spokesperson. 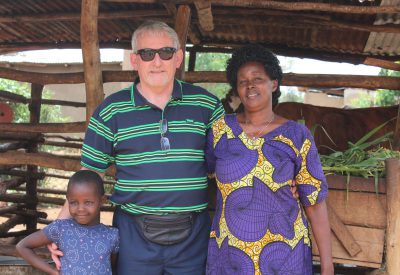 Tom Byrne with the recipient of an Irish cow

Tom Byrne who chairs the Bothar north-east support group, currently has 15 Friesians for Bothar on his 10ac holding in Inniskeen, Co. Monaghan. Other animals are also kept on land which specifically supports the charity.

I have always been lucky in life; I wanted to give something back when my family was educated. I saw that Bothar was sending goats out to various countries about ten years ago;  it was something I wanted like to support.

“I called head office, and within a month I had five goats on my land. Then I was asked if I would take a few calves. I have been working with Bothar ever since; it’s most rewarding,” he said.

“I was in Rwanda in October and I saw how Bothar’s work makes such a significant difference. One family that has been supported is now able to send their child to school; education is at the root of the issue,” he said.

The north-east support group also rears commercial animals which are sold at marts; with all funds going towards shipping and other Bothar costs.

“There are 150 to 200 people supporting our group’s work. People help Bothar in different ways and find great joy and happiness in being able to help out,” said Byrne.

Another support group is co-ordinated by dairy farmer, John Watson, in Roscommon. After speaking with the chairperson of Roscommon IFA; he set up the Roscommon and north Galway support group in 2000.

We fundraise at different events, and get great support from the mart in Roscommon. In my own village of Curraghboy, we have an annual auction and raffle that bring in roughly €4,000. A similar amount is raised by the community in Ballygar, Co. Galway, in its annual event.

The stock is sent out to countries in need under the names of the farmers that reared them; the donors are also recognised.

“Since 2003, our group has sent out over 600 heifers to parts of Africa and Eastern Europe. Farmers can see where their money goes. The animals are blessed before being sent out; and we are kept updated on their progress,” he said.

“We hope to continue sending out heifers for as long as possible as we know the difference it makes to families.

“We have just finished for this year but will start buying heifers and putting them on farms again in the spring; we accept donations right throughout the year,” Watson concluded.