Farming 170ac near Rathdowney, Co. Laois, Niall Walsh has well and truly gone down the New Zealand route when it comes to the genetics used on his farm.

Milking 120 cows and planning to lamb 130 ewes next spring, the Laois-based farmer made the decision to move away from the ‘Irish Suffolk’ to a New Zealand type ewe back in 2012.

Prior to making the switch, Walsh had been no stranger to success in the show ring. Having been runner-up in the Suffolk flock competition in 2006, he went one better in 2007 and won the competition outright.

Another key highlight of his time breeding Irish Suffolks occurred in 2009, when he sold a ram for €10,500 in Roscrea.

The route in New Zealand Suffolks

Having left school at just 16 years-of-age, Walsh immediately began working as a sheep shearer. Always having a passion for sheep farming, he used the monies earned from this work to develop his flock of pedigree Suffolk ewes.

“I used to do a lot of shearing and I had a great interest in sheep farming. I invested most of my shearing money into pedigree Suffolk sheep,” he told AgriLand earlier this week.

However, with the move from 70 to 120 cows, Walsh found that the workload associated with lambing a flock of pedigree Irish Suffolk ewes was just too much.

Every ewe had to be lambed and every lamb had to be suckled for two-to-three days. My father, Ken, was also getting older and he wasn’t able to stay out in the sheds as long. 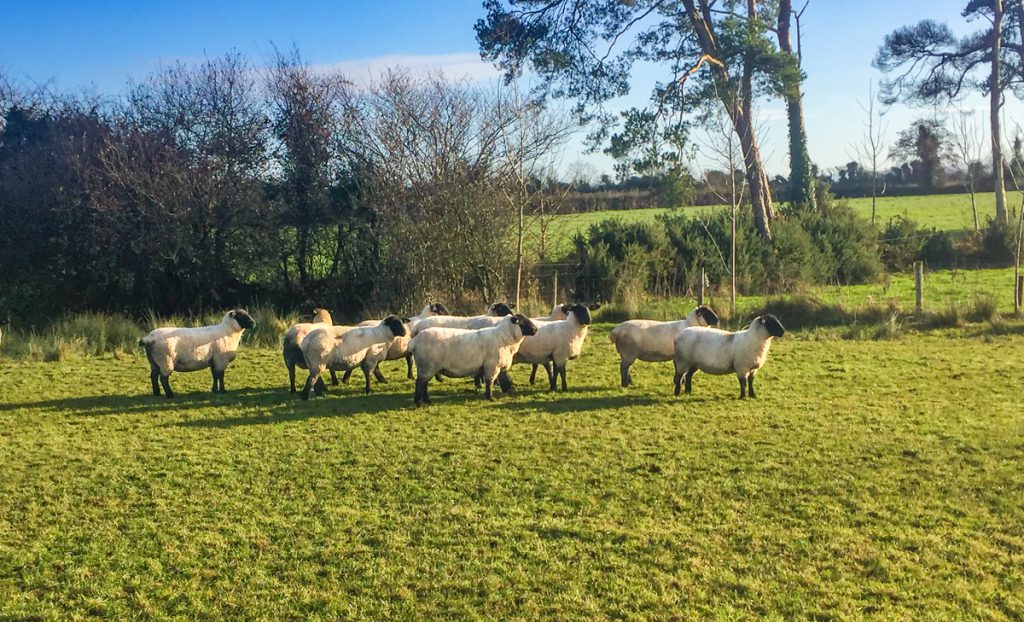 “I knew he started off selling a few rams and everyone thought he was mad. However, he was selling 300 rams at that stage and I knew there must be something in it.”

Walsh explained that a good few Irish commercial farmers were complaining about pedigree Suffolks being so soft. Issues were also raised about meal-fed rams falling apart after purchased.

To try and find a solution, Walsh visited Hulme’s flock in Shropshire, UK.

“I knew that his rams were reared on grass and they weren’t going to look as if they were ready for a show.

However, after seeing the ewes, I immediately knew that it was the way to go. The ewes were great, long, fleshy sheep with lovely, silky heads. I knew that if I could breed ewes like them I would be on to a winner.

After the successful visit, Walsh entered into a partnership with the UK-based farmer. The deal means that Hulme gets a percentage of Walsh’s sales each year in exchange for a New Zealand imported ram.

“Robyn is good to have on board, as he has the contacts. He’s bringing rams in from New Zealand and I get the choice of whatever rams I want to use.” 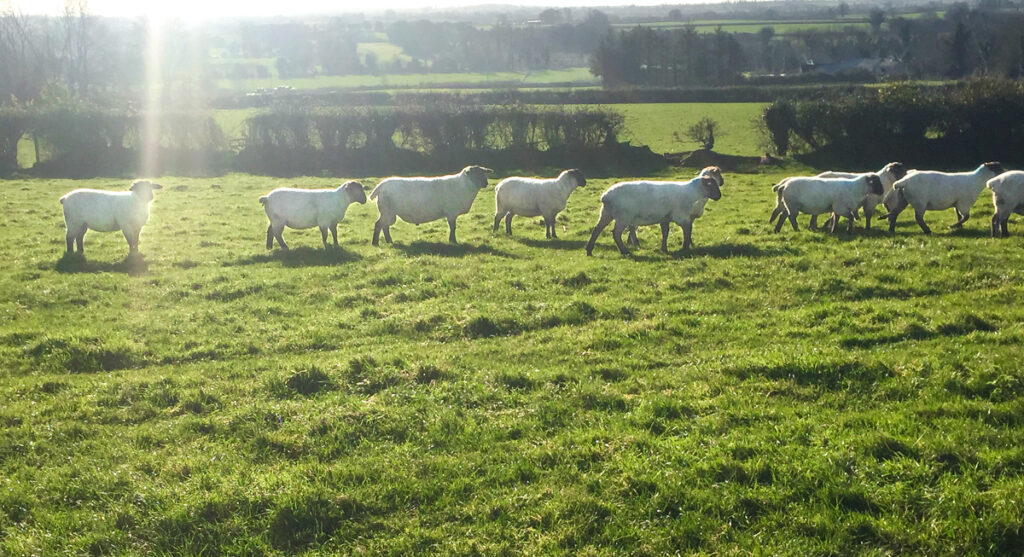 The ewes are expected to begin lambing on February 1 and are carrying 1.75 lambs per ewe joined to the ram.

On the benefits of the New Zealand Suffolk sheep, he said: “The difference is that there’s no problem lambing. They’re a wedged-shaped sheep, with a narrow shoulder and head.

Their ability to produce meat off grass is their biggest selling point. They’re easy to finish without meal and that’s the beauty of the New Zealand Suffolk.

“The problem with the original Suffolk is that they are just bred for meal finishing; they’re not able to convert grass into flesh.” 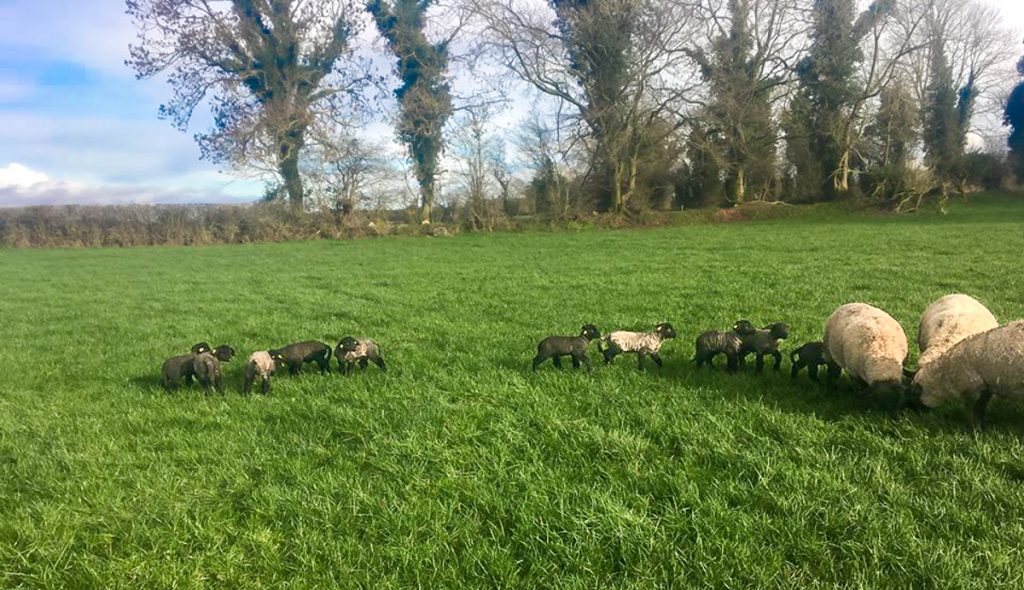 Some of the lambs born on the farm this spring

“The ewes usually lamb on their own. I don’t generally do anything except tag and weigh the lambs for the LambPlus scheme.

“This year, I grazed 24 heifers and 80 ewes for the summer in a paddock system – the same as the cows – and they were moved every three days. The minute the ewes lamb in February, they go straight out to grass.”

Is there a demand for New Zealand Suffolks?

Walsh lambed down the first of his New Zealand Suffolk lambs in 2013. As it stands, only two pedigree Irish Suffolk ewes remain in his flock and 90% of his flock are fifth-generation, New Zealand bred animals.

On the demand for New Zealand Suffolk rams in Ireland, he said: “The first year, I sold seven rams (2013) and I sold 50 rams this year. I could have sold more if I had them.

There’s an awful lot of people interested in the New Zealand Suffolk. It’s not that they’re a different breed than the original Suffolk; the only difference is that the New Zealanders didn’t go for bone and head like Irish breeders did.

“Wherever there’s showing of any stock – whether it’s cattle or sheep – it’s not helping the commercial farmer, as everyone’s pushing to try and get that little edge. 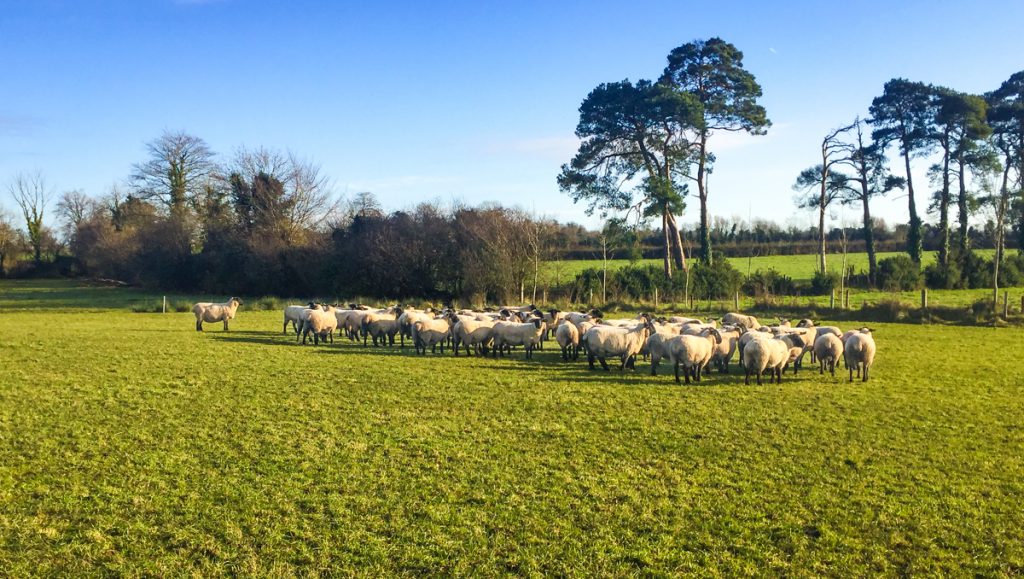 To ensure that his rams do not slip once they’ve been purchased, Walsh does not offer them any concentrates – they’re 100% reared at grass. Throughout the year, the only concentrate used by the sheep enterprise is by ewes during the latter stages of pregnancy.

This year, Walsh sold his ram lambs for an average price of €600. As ram lambs, these sheep have the potential to cover 80 ewes; this increases to 120 as a shearlings (hoggets).

In the future, the Laois-based farmer sees recording data as a key part of his business. By recording lameness and dagginess, he’ll be able to cull ewes exhibiting these undesirable traits to help make the future generations of his flock even better.

“Everyone likes a Suffolk to produce a crossbred ewe and they’re still the most popular ewe out there; there’s a need for Suffolk rams still.”

A move in a new direction

Next spring will mark the beginning of a new venture on Walsh’s farm, as 68 New Zealand Texel embryos were implanted into 33 crossbred ewes earlier this year.

From these, Walsh hopes to establish a New Zealand Texel flock. Buoyed by the strong research results from Teagasc Athenry, he hopes that it will open up new markets for him to supply farmers with both New Zealand Texel and Suffolk genetics going forward.

Along with the sheep enterprise, Walsh also runs a dairy herd of 130 kiwi-cross cows under a grass-based system (stocked at 3 cows per hectare). Last year, the average cow in the herd produced 480kg of milk solids from 510kg of meal. 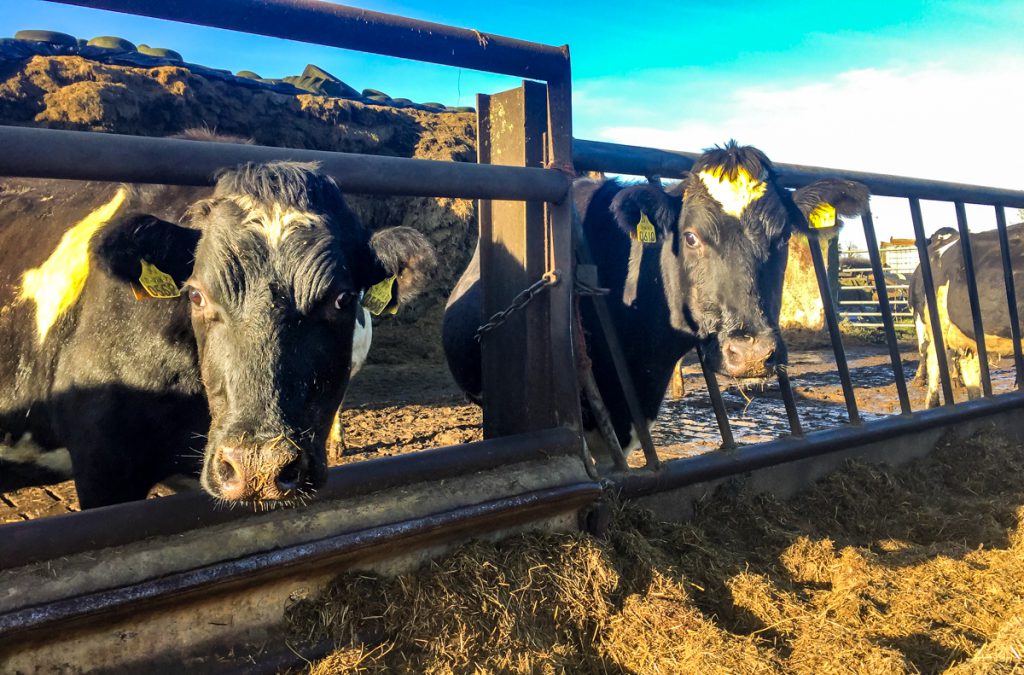 “I’m using kiwi-cross genetics for the last seven years and I very seldom have to assist a cow calving. I’m milking once a day at the moment and I’ll milk until December 12, as I want to get 10,000L in the December milk cheque.”

This year, Walsh also doubled up his 10-unit milking parlour and this has knocked one hour off morning and evening milkings.

For large parts of the year, Walsh runs both enterprises as a “one-man show”. However, a local block layer comes in during spring evenings to give him a “much needed push” when things are busy.

After playing a central role in the business, his father Ken (77) is still involved in the operation and offers whatever assistance he can.

Walsh also employs the services of relief milkers at certain times throughout the year. This is particularly important for allowing him to spend time with his young family. 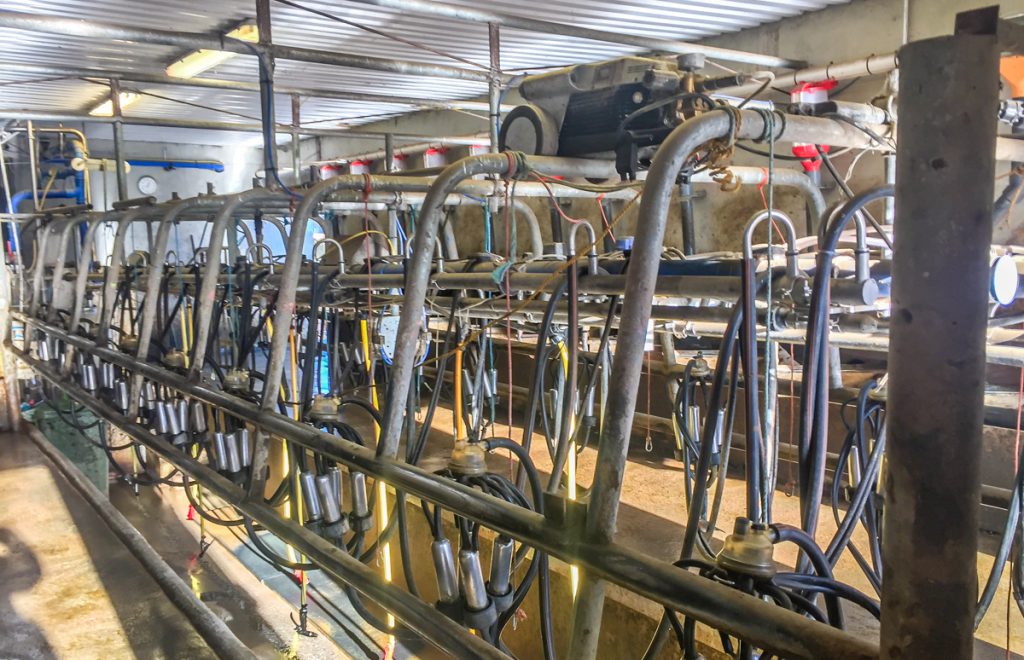 “I’m married to Regina and we’ve four four kids – Shauna, Keelan, Sinead and Rian – ranging from 10 years-of-age down to two.

“When the kids come along, you have to free up the time. You only get one chance and it’s great to be able to watch them playing soccer on the weekends.”