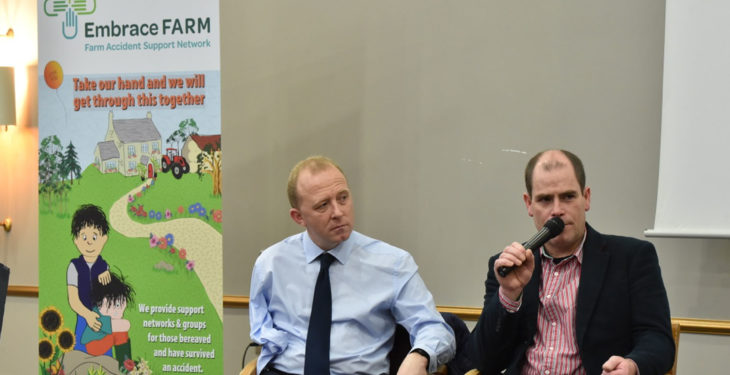 Few people would see a serious farm accident as changing their life in a positive way; however, that is the perspective of William Sayers, from Strabane, Co. Tyrone.

From a dairy farming background, he has worked in the machinery business, with D&M Farm Services for the last 25 years. The story of his farm accident – in which he lost his right arm – goes back to April 1990.

“It was Easter Monday, and I was putting out slurry on the family farm, with my friend, Jonathan. I was 12 at the time, he was 16.

“My father warned us to be careful. At 7:45pm my mother called us in for tea. When we were finished, she said: ‘That will do you for today’, but I said ‘I had one load left’. I thought I would get it finished.

Jonathan headed out first and I followed a few minutes after. My mother called me back to put on my coat, and I did that. I didn’t bother zipping it up as I thought I would just be out for a short time.

“Jonathan had everything up and running,” said the panellist at a recent farm accident survivors’ conference, hosted by Embrace FARM in Portlaoise.

“I realised the tanker was slow at lifting the slurry out of the tank. At the front of the tank there is a vacuum pump and a little regulator to control oil flow to help it lift the slurry.

“I thought it wasn’t working property so I made one or two adjustments. The shaft was guarded, all but for two inches next to the vacuum pump.

As I altered the regulator, my loose clothing caught in the shaft, taking me in. I was flung over the PTO shaft and battered onto the ground.

His friend could see all this happening and ran. “He thought I had been killed,” Sayers said.

“Initially I thought it was all over for me; but I realised then that I was in the same place, and made an attempt to get on my feet.

“At this stage I looked down and saw that I just had my socks and underwear on. I was stripped naked otherwise because of the shaft.

Then I remember looking to the right hand side and seeing my right arm lying on the ground. That is when I really realised what had happened. Then I couldn’t see out of my right eye and I thought I had lost my sight as well, he said.

He walked over to the house and his sister who saw him on his way, raised the alarm. His friend had been too traumatised by what he had seen, to speak.

My father met me at the door and got me into the car. He couldn’t see any blood coming out of the wound, and assumed I was going to bleed internally and die shortly.

The journey to Altnagelvin Hospital, Co. Derry, was 11 miles.

“We met two ambulances waiting for for me on two different roads, after we had gone five miles. I was transferred into one ambulance and the second one went looking for my arm,” he said.

That night he was transferred to the Ulster Hospital for surgery. An attempt to sew back his arm failed and after a week in intensive care, he was released into a general ward for a further week.

A positive return to agriculture

Incredibly, two days later he was back working at slurry.

I wanted to prove myself; to prove that I was hindered but not defeated. I had to learn to do things all over again.

Always an optimist, he said he looked at the accident as changing his life in a positive way.

“Before that, I took things for granted. It’s amazing how things can change as a result of an accident; but you become complacent again – it’s human nature.”

After returning to school and thinking things over; he realised that farming wasn’t for him, and found a job in the machinery business.

“I wouldn’t have made that decision if I hadn’t had the accident. My father is now 81 and I help out with the running of it as a hobby more than anything else,” said Sayers whose wife Elaine is a teacher. The couple have three daughters, Lydia, Grace and Beth.

He appeals to others to think safety first.

“The fallout won’t only affect you; but everyone around you. You’ve got to look at the bigger picture. The whole mess, trauma and havoc it leaves behind for your family is horrific. The guilt factor and mental torture for them is horrendous,” he said.

“Taking an extra few minutes to do things could make all the difference. When I was lying in hospital for 14 days, that extra load that I went out to do didn’t matter,” he said. 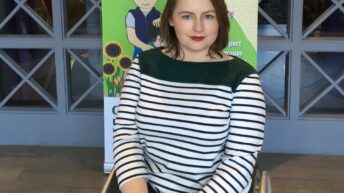