The issue of possibly raising the current quota limit on Irish beef in the US was discussed by the Minister for Agriculture Simon Coveney and his US counterpart US Secretary for Agriculture Tom Vilsack.

Ireland, along with a number of other countries, currently have access to a beef quota of 64,000t per annum.

Speaking following the meeting, the Minister said it is unlikely that here will being any change in the quota position prior to negotiations on the massive US and EU trade deal TTIP concluding.

“There will be no quota change outside of TTIP was the message from the USDA.

“The 64,000t of beef that Ireland and a number of other countries have access to use, is what it is right now,” he said.

The Minister said that up until a number of weeks ago no one thought there would be any problem all in terms of volumes.

However, on the back of the level of interest in the last couple of days has been so strong, he said, people are now saying Ireland could be able to export more than we thought.

“Let’s cross that bridge when we come to it.”

The Minister also said that about 10,000t of the quota pool Ireland can access went unused last year and also in 2013.

“So we will see where it goes.

“If we run into quota problems we can try and deal with it through TTIP. 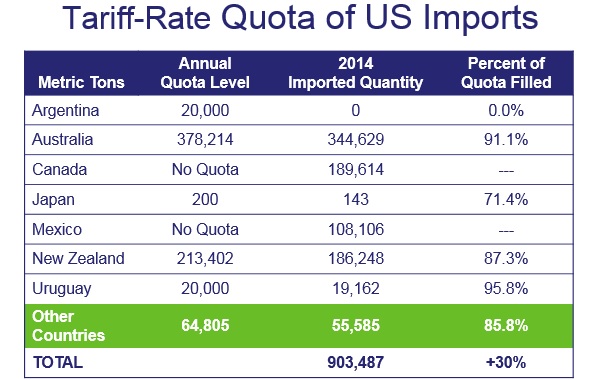